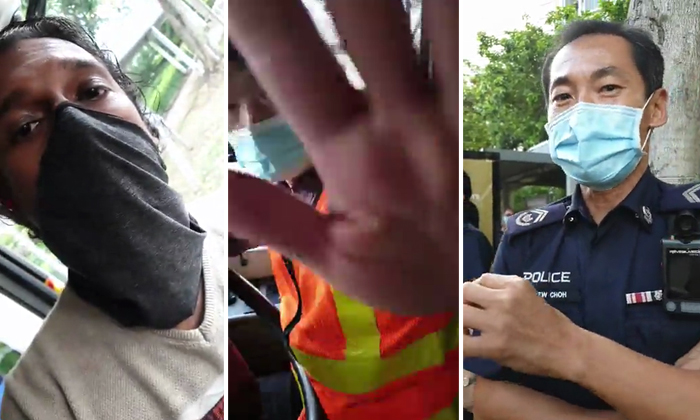 Another two incidents involving SBS Transit bus captains being harassed by commuters have occurred, said the transport operator in a statement to Stomp.

The first case involved a passenger who recorded a 15-minute live video of the incident and then posted it on Facebook on the same day.

In the video, the passenger is heard saying: "My name is Nimal De Silva. Now, this is my face and this is the driver here that says I cannot take his bus because I'm not wearing a mask."

Nimal, who was not wearing a regular face mask, had a neck gaiter wrapped around his nose and mouth instead.

During the dispute, Nimal can be heard making insulting remarks about the bus captain multiple times.

An onlooker then offered to give Nimal a mask, but the latter rejected it and replied: "Do not give in to these a**holes. These b******* are basically playing punk. Let's play punk together."

Nimal also repeatedly announced that the video was going on Facebook Live and that he had "a thousand friends" who would be watching it.

As other passengers eventually alighted the bus due to the delay, Nimal told the bus captain: "You are in so much trouble, young man."

When the police subsequently arrived, Nimal can be heard telling an officer who asked about his makeshift mask to "don't be ridiculous."

Responding to a Stomp query, Ms Tammy Tan, senior vice president of corporate communications at SBS Transit, said: "Wearing a mask and using it correctly on public transport is mandatory as part of a national effort to prevent the spread of Covid-19. Our bus captains have a duty to ensure that all commuters don masks and wear them properly.

"Unfortunately, there has been three incidents now where our bus captains have been harassed and even abused when they were carrying out their professional duties. One happened last week and two this week."

In reference to the Facebook Live video, Ms Tan shared: "In yesterday's situation, our bus captain was unsure if the man's wrap qualified as a mask and sought clarification from our operations control centre.

"He was trying to do his job but was unfortunately ridiculed by the commuter who not only filmed him but also made disparaging comments."

The police confirmed that they were alerted to a case of intentional harassment against a public service worker and public nuisance along Nicoll Highway at around 6pm.

In a separate incident on Thursday morning, a bus captain had advised a commuter to put on his mask properly as it did not cover his nose.

Ms Tan told Stomp: "The man subsequently engaged in a conversation with another commuter and pulled down his mask further which exposed his mouth too.

"He was again advised to put on his mask but responded by scolding the bus captain.

"The man later alighted and re-boarded from the front and confronted the bus captain where he physically abused him by grabbing his shirt, resulting in some buttons becoming undone.

"We take these acts of harassment against our bus captains seriously as they are frontline workers providing an essential service."

According to Ms Tan, the police are currently investigating both incidents and SBS Transit is assisting by sharing the CCTV footage with the authorities.

In a similar case on August 8, a man verbally abused a bus captain after refusing to put on his mask properly despite repeated reminders.

The man had also hurled vulgarities, flashed his middle finger and spat twice at the bus.

SBS Transit subsequently made a police report against the man.