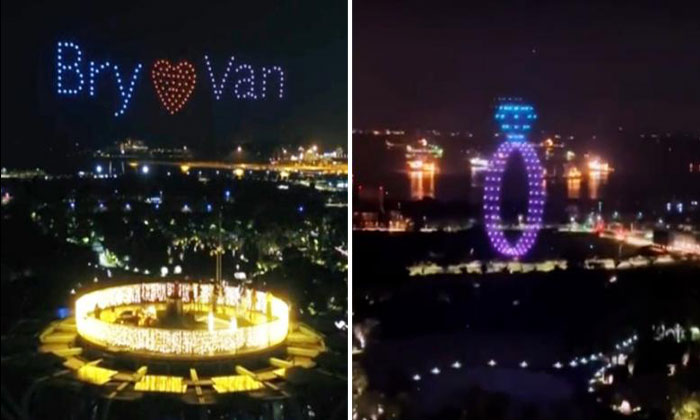 Whatever happened to the simple gesture of putting a wedding ring into a champagne flute or a bowl of soup?

One man in Singapore decided to get creative – and expensive – with his marriage proposal by organising an elaborate drone light show in the middle of Gardens by the Bay.

The light show, which involved 150 drones, was so large that it caught the attention of everyone in the Marina Bay area.

The drones were arranged at The Meadow, an open field in the middle of Gardens by the Bay. They set off once the sun had set and created a number of formations, including a giant, twinking wedding ring.

The man brought his fiancee-to-be to the top of one of the Supertrees at Gardens by the Bay, where the couple had a clear view of everything.

He then got down on one knee and presented a ring to his partner.

It’s safe to assume that the woman said “yes”, and the couple watched the drones forming "Bry♥️Van" and "I LOVE U".

The light show, which lasted about seven minutes, was capped off with fireworks.

150 drone light show  This drone idea definitely brings an old-fashioned wedding proposal to the next level! One thing is for sure: none of the proposals can top your drone light show.Contact: +65 6718 2231Email: mirs@mirs-innov.comWebsite: https://www.mirs-innov.com/drone-light-show

Local drone vendor MIRS Innovate uploaded a video of the proposal – and its set-up process– to TikTok.

According to the firm, it takes eight to 10 weeks to prepare for a show, which includes site survey, design, programming, flight test, and a rehearsal.

They also have two pilots and two safety officers to ensure safety during the show.