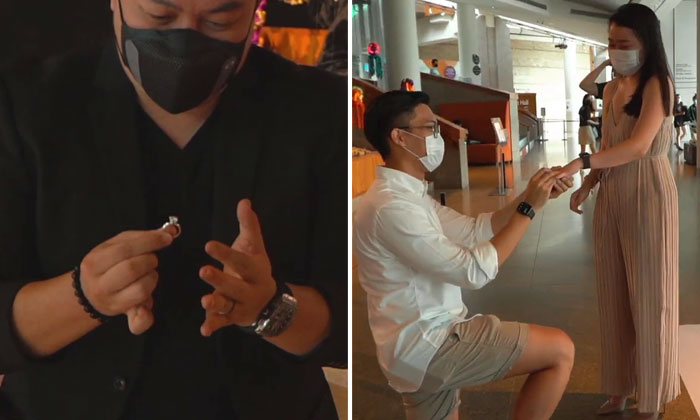 Almost everyone hopes for their engagement to be a memorable experience but one man roped in a magician to make it actually magical.

Local magician Jeremy Tan shared with Stomp how he helped his long lost friend, Ivan, propose to his girlfriend at the Esplanade last month.

Although Jeremy has been a professional magician for 20 years, this is the first time he has been part of a proposal event.

"Ivan and I are friends but lost physical contact for many years," he said.

"We still kept in touch on social media and that's where he reached out to me."

Despite planning the proposal since February, the surprise was almost ruined by the rain.

Thankfully, Ivan had a Plan B indoor location to carry out the act.

Jeremy performed card tricks and then a coin trick before revealing the engagement ring and passing it to Ivan.

"It was my idea to come up with the plot of 'Performing Magic in times of Covid'," said Jeremy.

"My team and I planned and designed all the magic, including the reval of the ring."

He added that the event attracted some attention, especially when Ivan got down on one knee to pop the question.

"Some were cheering when she said yes!

The experience was a pleasure for Jeremy who said he hopes to be part of more surprise proposals.

"That was my first time as a magician doing something like this and it was really really wholesome.

"Adding a memorable magical experience that I hope they can remember for the rest of their lives and a story to tell their children."

Check out the magic act and surprise proposal in the video below.