Man pays $45 for extra long taxi ride from Sembawang to Pasir Panjang: 'What a trip!' 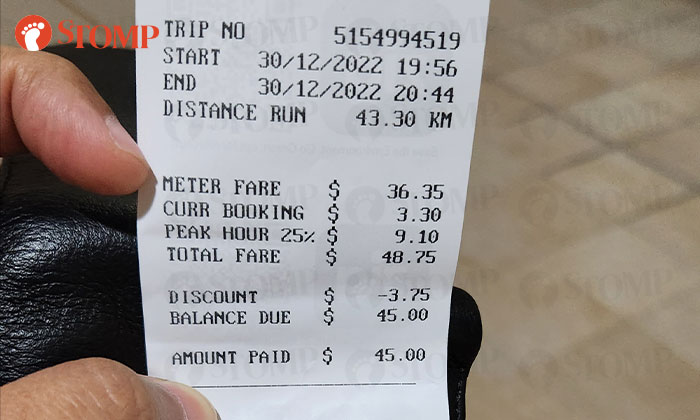 In response to a Stomp query, Ms Tammy Tan, Group Corporate Affairs Officer of ComfortDelGro Corporation Limited, said: "We have investigated the matter.

"The cabby had missed an exit along AYE, which resulted in a longer route taken.

"He has been issued a warning and has been advised to check with passengers on their preferred route in the future.

"We have conveyed our apologies to the passenger and have offered her complimentary promo codes for the inconvenience caused."

A man paid $45 for a taxi ride that was almost twice as long as it should have been.

Stomper Min Thu told Stomp that he booked a taxi ride from opposite Sembawang MRT Station to Poh Ern Shih temple in Pasir Panjang on December 30.

Although it was a trip from the north to the south of the island, the Stomper said that the driver made a detour to the west as well.

"It may take 35 minutes and 28km for all the possible shorter ways. 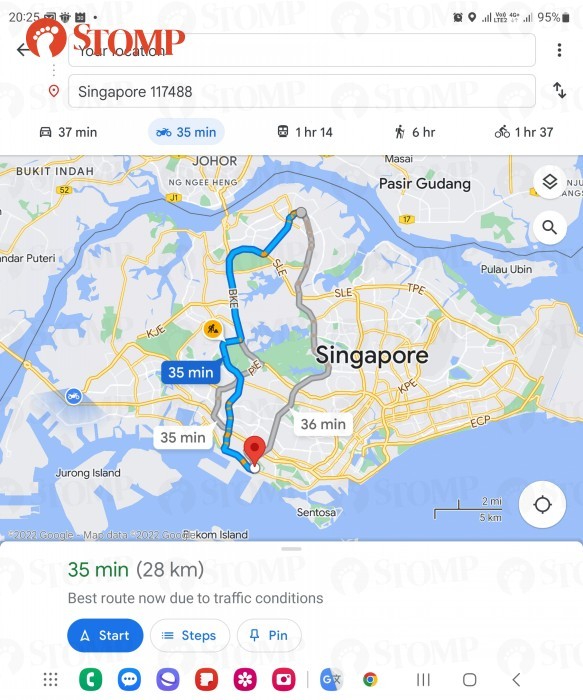 "Finally it took us 10 minutes more for the 43.3km trip because of the extra Kranji Expressway (KJE) and Ayer Rajah Expressway (AYE) route."

When asked if he alerted the driver he was going the long way, he said: "Yes, the moment he turned onto the KJE, we told him nicely not to take us the long way as we have lived here for over 17 years.

"I also told him that I worked at HarbourFront and I take a taxi from home to the office frequently.

"What he replied was to see how fast we can reach as his route is the best of all.

"He also mentioned that we can cut the pay if we think it is too much.

"We told him that we are not worried about money but the time to reach there as the appointment was already set.

"He ignored our suggestion and drove until we reached the junction of PIE and AYE and where we saw the Tuas Checkpoint directional signage.

"My wife and I even told him that this is the western part of Singapore already while we just wanted to go from north to south only.

"We also highlighted that we lived in Clementi when my wife was studying at the National University of Singapore (NUS) and I worked at The Infiniti condominium construction project along the AYE 17 years ago."