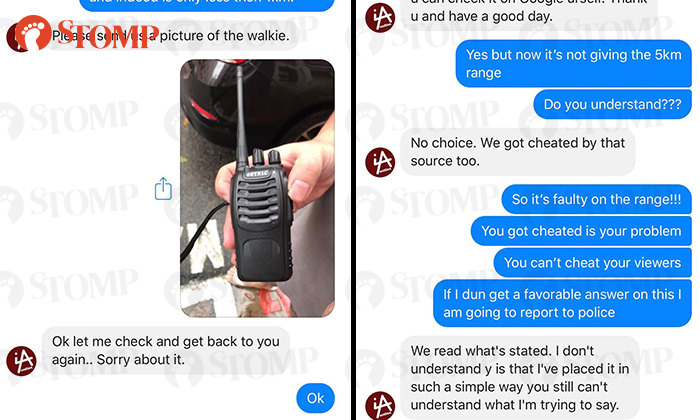 When you shop online, there is a risk of ending up with products that do not fit their descriptions.

Stomper E told Stomp about one such example, when he recently purchased a walkie-talkie from a Facebook live auction page, which grossly overstated the gadget’s effective range.

Excited, E immediately tested out the new gadget but found that the range would not extend beyond 1km, whereas the website description listed the range as 5km.

E immediately dropped the page a private message to ask for an explanation.

He was appalled when the administrator became defensive and told him that they would not do a refund as the product was in working condition, despite E having never asked for one.

The administrator then told E that the site simply ‘reads what’s written on the net or the description paper provided’.

Unhappy with their reply, E struck back, saying that it was unfair from the viewpoint of a consumer, as the item was not what he had paid for.

However, the administrator insisted that the fault did not lie with the site, as it was ‘cheated’ by the supplier of the walkie-talkies too.

E then told him: “So it’s faulty on the range!

"You got cheated, (that) is your problem. You can’t go cheat your viewers."

Despite the conversation, the two sides could not come to an agreement, with the administrator asking E to 'go ahead' in escalating the matter.

E continued, adding: "I don't need a refund, I just want an explanation for the situation."

Related Stories
Woman purchases 'gold' rings online for $99 -- that turn out to be gold-plated
Woman receives food delivery that spectacularly fails to live up to expectations
People who cook up a storm... versus those who conjure a disaster
More About:
online shopping
facebook
scam