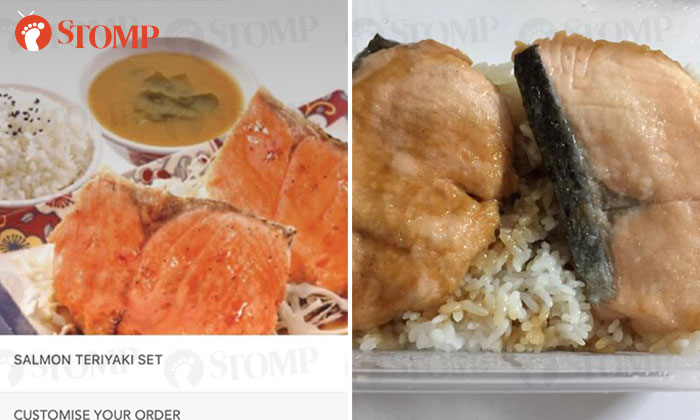 With a range of food delivery options to choose from, getting your meals sent to the comfort of your home is easier than ever.

However, how do you know what you are getting?

For most at-home diners, they rely on photos to decide on what to order, which is what Stomper Angela did when ordering two meals using the foodpanda app.

She decided that she was in the mood for Japanese cuisine and ordered a "Salmon Teriyaki Set" and "Chicken Teriyaki Ebi Fry Bento" from JJ Food Express.

Things turned sour when she received her meals and noticed the drastic difference from the photos that were advertised.

Apart from the stark disparity in appearance, she noticed that her meals were missing items as well.

"My salmon meal did not come along with a salad that was included in the photo," she said.

She added that the salad that came with the chicken teriyaki meal was different from the photo shown in the menu.

"Both meals didn't come with soups either."

Do you think that this difference between expectation and reality is a cause for concern or something that you can live with? Tell us in the comments below.

Related Stories
People who cook up a storm... versus those who conjure a disaster
Epic fails that show how online shopping can give you trust issues
Girls who bought their prom dresses online -- and seriously regretted it
More About:
food
expectations vs reality
delivery