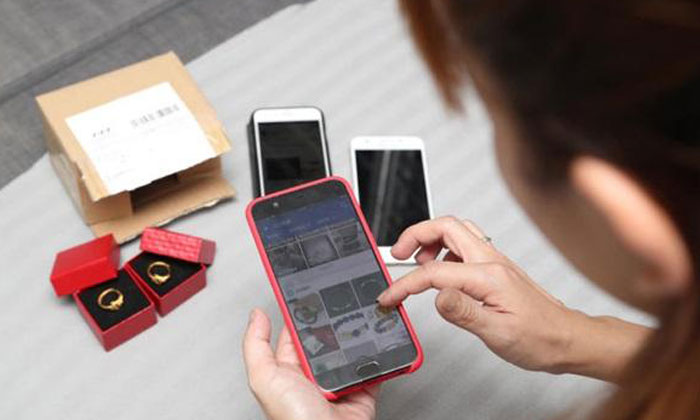 A woman decided to get a pair of '999 Gold' couple rings online as a wedding gift for a friend, only to find out that they were gold-plated.

Ms Zhan, 37, initially thought that she had landed a good deal when she found an advertisement on Facebook selling the rings for $99.

To ensure that the advertisement was genuine, she visited the website and found it also carried many other accessories in addition to the rings.

"At first I was worried about the reliability of the seller, but I discovered that they had a cash-on-delivery service.

"I once ran an e-commerce website, and a policy like that allows buyers to avoid paying if the goods aren't the same as what they ordered."

Inspired by their apparent professionalism, Ms Zhan decided to place her order.

Within three days, a courier got in touch with her to fix a delivery date and time.

"I didn't check the goods when making the payment as I was in a rush.

"When I opened up the box later, I was shocked."

Instead of couple rings, she had gotten two rings for men.

According to Ms Zhan, the rings looked 'dull' and felt 'light', unlike real gold.

Moreover, the numbers '925' engraved on the rings did not coincide with the '999 Gold' rings she was promised.

When Ms Zhan confronted the seller over the purchase, she was told that she could return the goods if she was unhappy with them.

Although she tried asking for a refund, the seller ignored her.

Ms Zhan said that she did not lodge a police report as $99 was not an astronomical sum, and she did not wish to blow the matter out of proportion.

Related Stories
Online buyer learns not to trust others so 'Yeezy-ly' after receiving fake Adidas shoes
Woman orders iPhone 7 online… and of course receives anything but that
Chinese tourist runs into Thai conmen, allegedly gets cheated S$1.6K from accident scam
More About:
online shopping
expectations vs reality