Man loses US$3k to investment scam, then receives texts from scammer asking him to join her team 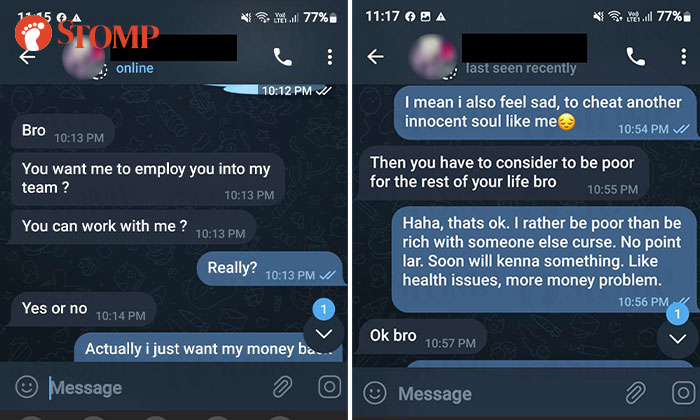 A man who lost US$3,000 (S$4,226) to an investment scam was shocked at the audacity of the alleged scammer when she contacted him again, asking him to join her in an 'illegal business'.

Stomper F shared with Stomp that he had come across the Facebook profile of the alleged scammer in early August this year.

"She showed herself as a top ten crypto trader, very helpful person and single mum," said the Stomper.

"So I added her as my friend, and everyday, she posted how she was helping people to earn money.

"On Aug 14, I messaged her on Facebook and she said I could start investing with just US$500 (S$727) and make a big amount within a week.

"I bought US$500 worth of KuCoin and transferred it to the wallet address she sent me on Aug 15."

After one week, the woman showed F that he had made a profit and his account balance was US$116,850. She told him he could withdraw the money in ten minutes and just give her 10 per cent of the profit.

When F applied for the withdrawal through the trading account, he received an email that he needed to pay US$15,370 for the broker commission.

F saw red and confronted the woman about this. She told him she could 'help' him pay US$12,000 and he would only have to US$3,000 and in ten minutes, he would receive the rest of the money.

After two to three days, F did not receive any of the money, only an email asking him for another US$2,500, adding that the money in his account had been transferred and he needed to pay the 'reflection fee'.

F went back to the woman again and told her this was 'never-ending' and highlighted that he was not given any prior information regarding these payments.

He has since shared his story on Scam Alert's website to warn others.

To F's surprise, he heard from the woman again on Sept 11 but it was not about returning him his money.

Instead, she asked him if he wanted to join her 'team'.

She even confessed that it was illegal when F probed for more information.

She added that "most Singaporeans" are doing this and are almost all "young millionaires".

Playing along, F asked if they would get caught to which she confidently replied they would not: "That's why doing everything online (sic)."

She also said that her business was "legit" because she had a lawyer and that she could "cover-up" for everyone.

Apparently, the job would require him to refer people to invest with her and he would get a commission for every person who invests.

Jokingly, F said: "So that person will become the current me right."

When he declined to take up her 'offer', she told him: "Then you have to consider to be poor for the rest of your life bro."

"I just played along then halfway rejected the offer," said F.

"Thinking about it, this is a big network, I think surely many people are involved.

"What is gone is gone, it's okay but my motive is just to alert the public that this kind of thing is happening and to help them from getting scammed as well."

Click through the whole conversation in the gallery above.