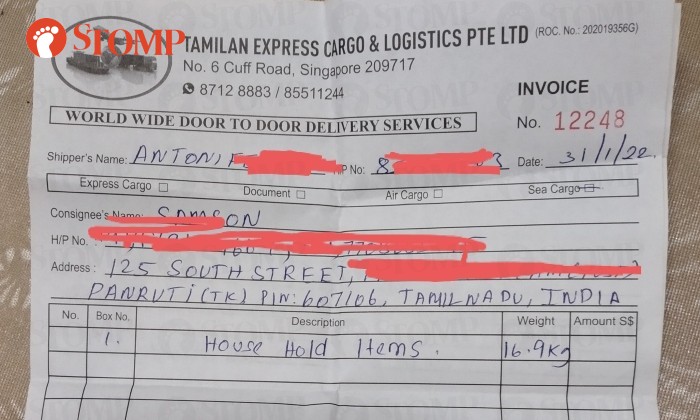 He had sent 16.9kg of household items from Singapore to Tamil Nadu, India, on Jan 31.

He shared a photo of the invoice with Stomp. 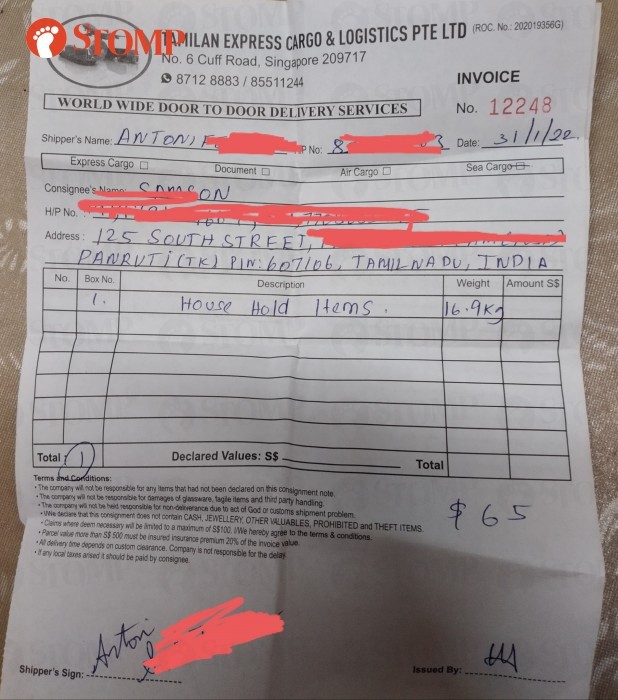 The Stomper, who is now in India, said: "They told me it would take three months to deliver my goods. After over seven months, I have not received any goods.

"Some time ago, they messaged me that delivery would be the next month.

"I called so many times. No one picked up my call."

Stomp has also called the numbers on the invoice and no one answered.

The Stomper said that if he were in Singapore, he would make a police report.

"I think it is a scam company. I want nobody to use this company to send goods."

He is not the only one who feels cheated by Tamilan Express Cargo & Logistics.

Someone named Shankar made a Tiktok video, posted on Aug 29, where he went to the company's office at Cuff Road in Little India and complained about the terrible service and waiting 10 months for his delivery when he was told it would take three months. He then confronted a staff member there.

The video was also posted on Facebook with the description: "Warning and caution, public don't get cheated. Tamilan Express Cargo & Logistics."

The company is listed on a website called Singapore Scam, where people report scams.

On the website are nine complaints about Tamilan Express Cargo & Logistics with the earliest posted on July 17.

One of them, posted on Aug 11, said: "They talk sweetly, come to your home and collect the goods from you, but you never receive the goods. They took the entire household's items in May 2021. Until today, it hasn't reached. It's modern robbery."

A more recent complaint, posted on Sept 3, said: "I had sent my items on October 2021 to India, but until now, not received.

"My friend walked to their office so many times as I am currently in India, but no response. Every time they said this month's end I would receive and other stories like container not released, etc.

"I am so tired of calling them. I even told them I will report them to the police.

"Today, my friend saw they had almost cleared everything from their shop. Likely closing down.