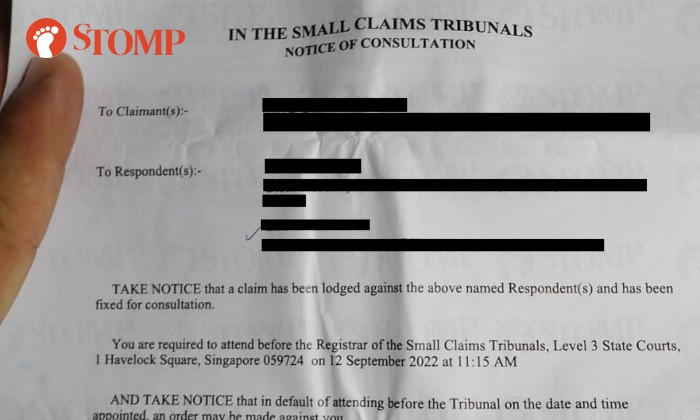 A man is being taken to small claims court after his partner in an air-conditioning company "disappeared" after receiving a client’s money.

Stomper Lee met his future business partner, Nick, in February when they were working as delivery men for a courier company.

The Stomper said that Nick claimed he had an aircon company that was about to be shut down because Nick’s partner had withdrawn from the company.

Lee said: "As I wanted to help him and carry out an investment, I decided to be a partner in Nicks company."

The Stomper would subsequently invest a total of $16,900 in the company. He quit his delivery job in May to focus on the company with Nick.

Lee said: "We then did a few business transactions with different clients and everything was fine."

Trouble started when the Stomper went overseas, accompanying his wife on a business trip.

"During this period, customers contacted me for aircon installation quotations," said Lee.

"After Nick received the deposit, he promised to start work two weeks later. However, work did not start and he gave excuses instead.

"The work got delayed and Nick made a promise to the client that he will refund the deposit, but he didn’t.

"Previously, Nick told me that he had a worker named Kabir who was helping him when I was not in Singapore. I decided to contact Kabir to seek verification.

"Kabir told me that he had stopped working for Nick for more than a year. He also told me that Nick has 'cheated many people' and did not pay his salary for many months.

"After I came back to Singapore, the client contacted me and informed me about his situation.

"I then decided to meet the client at 90 Desker Road, which was the company’s office address provided by Nick.

"However, when we reached the said location, we discovered there was no office in the area.

"In addition, the client told me that Nick claimed that our company's supplier had no stock for a product. However, I checked with our supplier and was told that they had stock and they informed Nick about it. However, there was no response and payment from Nick at all."

Lee said that he and the client made a police report, after which Nick "suddenly disappeared". 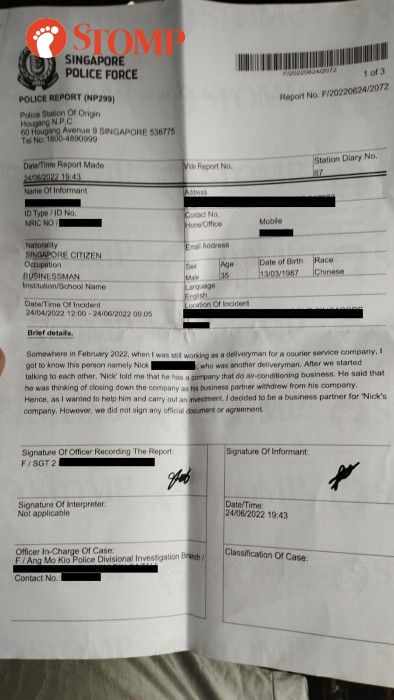 "I was not able to contact him with all the numbers he used to have. I went to his home address, but an elderly man opened the door. I believe he was Nick’s father-in-law. He said he had no knowledge of Nick’s business and I should contact him directly."

Last month, the client lodged a claim in the Small Claims Tribunals against the Stomper and Nick for the $6,150.36 deposit.

Since Nick could not be found, Lee would have to face the tribunal on his own.

The Stomper has since made another police report. 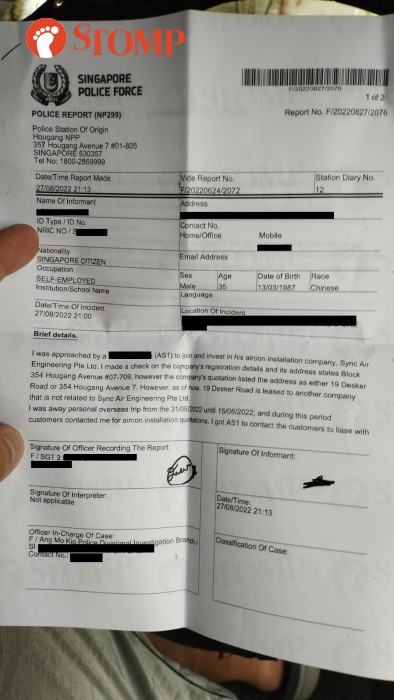 He shared with Stomp links to Facebook posts about people allegedly being scammed by Nick’s company, one posted in January and the other last month.

Lee told Stomp: "The worst part is the police are treating it as a case of breach of agreement. Police said they were in the midst of reviewing the case but still no updates."

In response to a Stomp query, the police confirmed that the police reports were lodged.