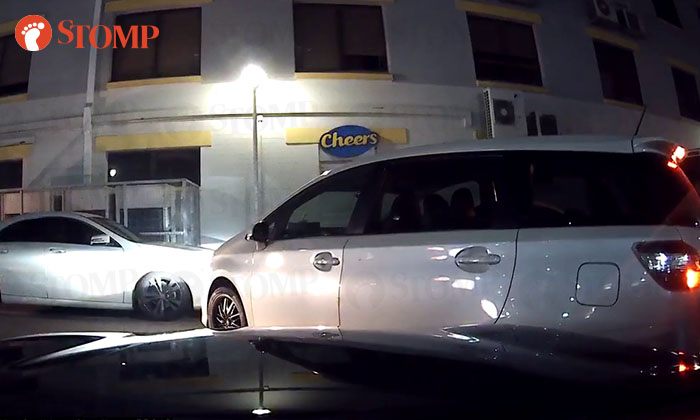 A man is looking for a driver who fled the scene after hitting his BMW car that was parked in a carpark at Block 810 Hougang Central on Saturday night (Jan 11).

The Stomper contributed footage from his in-car camera and said: "I went there for dinner with my family and when we returned to my car, I didn't notice anything because the carpark was quite dark.

"The lower part of my front bumper is damaged, a part of the skirting has cracked and there are scratches on the driver's side headlight."

The Stomper added: "The car was turning out from the right side of my car.

"I think its rear tyre went over the skirting of my car's bumper, so you can see from the video that my car lifted up.

"I only noticed that my car was damaged when I had returned home at about 10pm and was about to clean it.

"Right after, I went to check my in-car camera's footage.

"The timestamp is wrong but based on my assumption and some calculations, I think it happened between 8pm and 8.30pm.

"I haven't done any repairs as my insurance agent advised that I wait a while so I could claim from the person who damaged my car.

"As of now, I've only cleaned it so the car looks slightly better.

"I've reported this to the police and I'm waiting for them to get back to me.

"I know the car plate number but I don't want to shame the person.

"I'm not out to get money or compensation but I feel that it's just not right for someone to drive off like that. That's something I can't accept.

"You have to own up to your mistakes and be responsible. My blood really boils because of this."

Responding to a Stomp query, the police confirmed a report was lodged and investigations are ongoing.