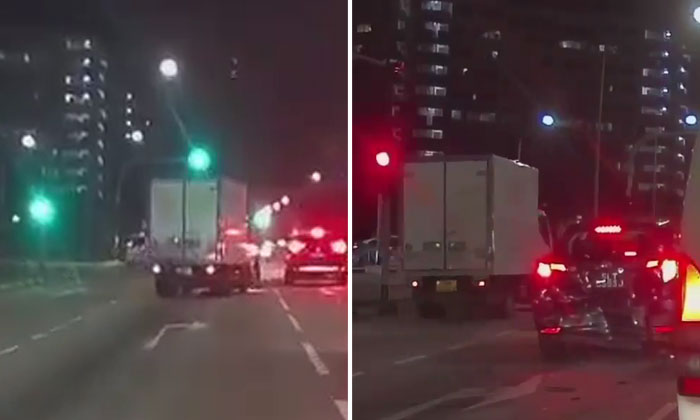 On Dec 26, Asia Ocean Pacific posted a statement on their Facebook page, apologising for the actions of one of their drivers.

The statement said: "Asia Ocean sincerely apologises to all relevant parties who were involved in the traffic accident that took place on 25 Dec 2019 at around 1:00 am.

"We are currently assisting the traffic police with their investigation and also supporting our employee’s family in their time of need.

"Asia Ocean will like to emphasise that we have no tolerance for any irresponsible employee who does not abide by the law.

"The safety of the public and our employees is of utmost importance. We will take extra precautions to prevent similar incidents from happening again."

A lorry was caught on video rear-ending a car at a traffic light in Tampines before beating a red light to flee the scene on Wednesday (Dec 25).

A Stomper alerted Stomp to the video that was posted on SG Road Vigilante's Facebook group page.

In the video, the lorry fails to stop in time and hits the rear of the Honda Vezel in front of it.

However, instead of settling the matter, the driver is seen overtaking the car from the left and beating a red light to drive straight along Tampines Avenue 2.

The back of the Honda appears to be dented following the collision.

Netizens have slammed the driver for dangerous driving and fleeing the scene, adding that he cannot hide as his actions have been caught on video.

In response to a Stomp query, the police said they were alerted to the hit-and-run accident involving a lorry, a car, and a taxi at about 1.27am.