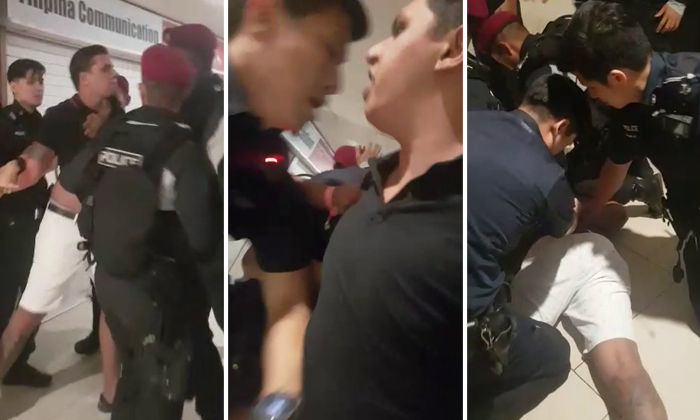 A 29-year-old man was arrested for multiple offences after being seen restrained and pinned down by police officers at Lucky Plaza in the wee hours of March 2.

Videos circulating online show a crowd gathered outside the Platinum Music World club, located on the third storey of the shopping mall.

In one video, a man can be seen putting up a struggle as several police officers tried to restrain him

However, the man continues to struggle and is eventually pinned down by police officers.

In response to a Stomp query, the police said they received a call for assistance at 304 Orchard Road at 5.18am.

The man was arrested for disorderly behaviour, voluntarily causing hurt to deter a public servant from carrying out his duties, and using abusive language against a public servant, said police.

A witness at the scene told Stomp that no fight had occurred at the club that night, contrary to claims on Facebook.

Speaking to Stomp on Thursday (March 14), the witness, who declined to be named, said that it was a regular weekend night with almost 200 patrons at the club.

She explained: "Everyone was going home at that time and there is only one exit out of the mall.

"As usual, there were police stationed in the vicinity. This is very common in any nightlife hotspot.

"A couple was having issues between the two of them near the escalator. This led to a commotion as their friends started to gather around them, so the police tried to intervene.

"A customer passed by the couple and noticed that the guy was a friend, so he went up to say bye.

"However, an officer stopped him by pulling him back.

"This offended the customer, who got angry and felt mishandled."

Meanwhile, police officers and staff from the club can be seen trying to disperse a crowd that had gathered at the scene.

The witness added: "When police officers asked the customer for his identification card, he did not want to cooperate and turned aggressive, which led to him eventually being arrested.

"The customer's friends were trying to convince the officers not to arrest him.

"With over a hundred people exiting the building, club staff were trying to ensure that everyone left safely and stop them from going near the scene while the police were handling the incident.

"There was no fight at all."