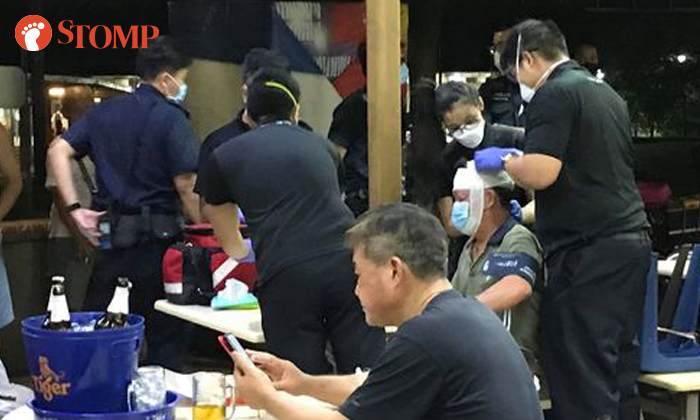 A coffee shop patron was injured after allegedly being attacked by a man in Yishun last Thursday evening (July 15).

Stomper Naomi said she was having dinner at the S-11 coffee shop at Block 744 Yishun Street 72 at around 8pm when the incident occurred.

She recounted: "A man, who looked to be in his 30s, took a beer bottle and hit a poor uncle on the head several times till the beer bottle shattered and broke into pieces.

"The assailant continued to hit him on the shoulder and head.

"The uncle was quite shocked as it seemed to have happened out of the blue.

"Someone subsequently came forward and pulled the assailant away. We don't know what happened to him as he fled.

"Kaypoh auntie me dialled 999 and called the police to come and investigate."

According to Naomi, five police officers arrived at the scene 15 minutes later. Paramedics also came and bandaged the victim's head, which was bleeding.

The Singapore Civil Defence Force (SCDF) told Stomp that it received a call for assistance at about 8.55pm and conveyed one person to Khoo Teck Puat Hospital.

Naomi said "everything happened so quickly" that she did not manage to capture a video of the assault, adding: "But I saw everything, including how the uncle was hit.