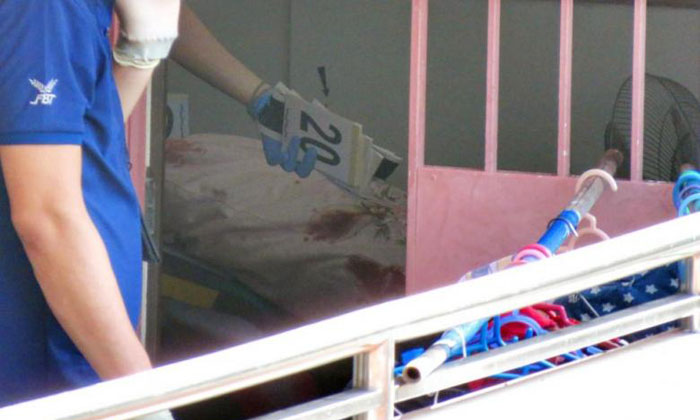 A 48-year-old Singaporean man was arrested after allegedly attacking four people with a knife in a flat at Block 2 Jalan Bukit Merah Road yesterday morning.

Police officers who were on patrol in the vicinity at about 6am saw a woman with blood-stained hands on the ground level. They attended to her and responded to the incident at a unit on the second storey of the block.

Preliminary investigations revealed that the man had allegedly entered the unit while the four individuals were asleep and assaulted two female tenants of the unit with a knife.

Two male tenants of the same unit came to the women's call for help were also attacked.

Another tenant escaped from the unit to seek assistance from police officers on patrol nearby. He did not suffer any injuries.

The injured were taken to hospital.

Preliminary investigations revealed that the man had previous drug convictions. He is believed to have acted alone, and the victims were not known to the man.

Residents told The New Paper that all four victims work at the coffee shop at the block.

A retiree, who wanted to be known only as Mr Yeo, 59, told TNP: "It is quite unnerving to know that so many people are injured, but violent arguments are quite common here."

Mr Yeo, who lives on the third storey, added that he would lock his door whenever he slept.

Mr Eric Chua, MP for Tanjong Pagar GRC's Queenstown ward, wrote on Facebook yesterday that he visited the scene and spoke with the police officers investigating the case.

Assuring residents that the situation is under control, he said: "Police are continuing their investigations into the motive of the attack. Do avoid crowding the area as our police officers complete what they need to do.

"In the meantime... police have also stepped up patrols in the vicinity."

Related Stories
Teen allegedly attacked woman from behind for taking photos of him not wearing mask
Woman slapped 8-year-old girl who stepped on her foot in MRT train, left her with bruise
21-year-old man allegedly attacked dad with sharp object, leaving him with multiple injuries
More About:
arrested
attack
knife
blood
injured