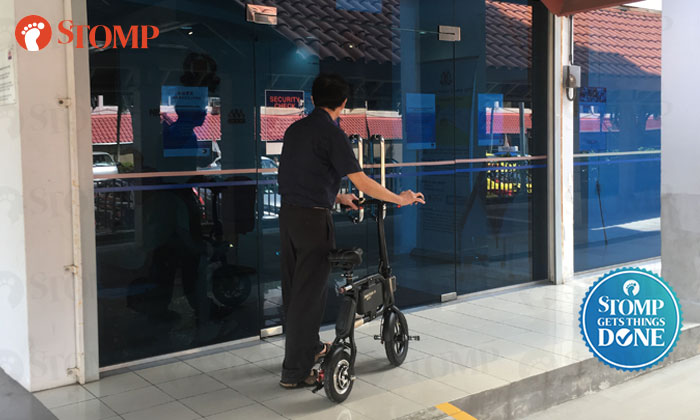 A man handed over an e-bike to the police after finding out that they were looking for him through a Stomp report.

In the report that was published on Jul 23, it was stated that the police were looking for a man in relation to a case of criminal misappropriation of property that took place at Block 457 Ang Mo Kio on Jun 25.

The police released a photo of the man and appealed for anyone with information about him to come forward.

Less than 24 hours after the story was published, a man reached out to Stomp via telephone and identified himself as the individual in the photo. He told us that the 'property' the police were referring to is an e-bike.

Following a conversation with him, Stomp alerted the police.

Thereafter, we advised the man to hand over the e-bike to officers at any police post.

The man obliged, and agreed to meet a Stomp reporter to share his side of the story.

We met the man, How, near Teck Ghee Neighbourhood Police Post yesterday (Jul 24) at 2pm.

There, the 63-year-old told us that he initially saw the small, black e-bike at the void deck of Block 457 Ang Mo Kio near a lift landing on Jun 25.

He said he felt the mobility device would 'get lost', and placed it at a bicycle rack a few metres away.

According to How, he thought about it again and came to the conclusion that the same thing would happen if the unlocked e-bike was left at the rack. As such, he decided to take it home.

He expressed no interest in using the e-bike and told Stomp he did not know what to do with the item.

How explained that it did not cross his mind to hand it over to the police as he was always exhausted after work.

He was subsequently alerted to the Stomp story by a relative on Jul 23. Shortly after that, he reached out to us.

He said that what he has done was 'stupid', and described what he is going through now as 'torturing'. He also told us he has learnt the hard way not to be a 'busybody' in future.

When asked if How had anything he wanted to tell the owner of the e-bike, he said:

"Sorry I caused alarm to him or her."

How mentioned that the case has come at a bad time for him as he had been having disagreements with his family.

Things in his household have improved somewhat prior to the events that have transpired, but the Ang Mo Kio resident is unsure if he can weather the storm after this.

He currently earns around $2,000 a month, and hopes that his livelihood will not be affected by what has happened.

Following our meeting, How handed over the e-bike to officers at Teck Ghee Neighbourhood Police Post.