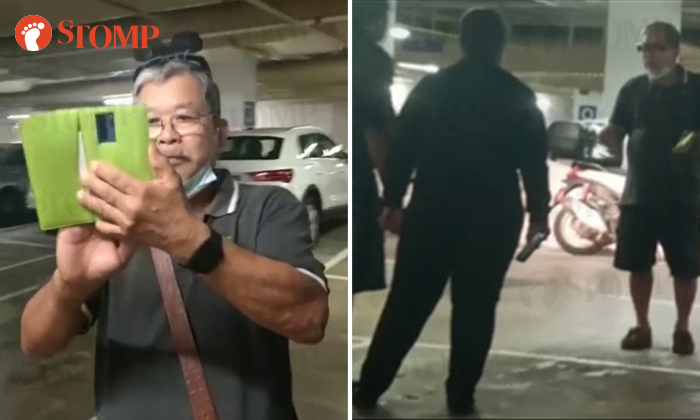 A man approached several motorists at a carpark to reprimand them for having their engines on and supposedly polluting the place.

Stomper Simon said the incident occurred at the carpark of the Health Promotion Board (HPB) building at 3 Second Hospital Avenue on Monday (Jan 17), at around 12.30pm.

Simon, who had been sending his daughter to her appointment, recounted: "This guy knocked on my car window and asked me why I had turned on my engine inside the carpark. I told him that I was about to move off from the carpark.

"However, he insisted that turning on the engine would pollute the whole carpark and can cause death. He kept talking about pollution. Still, I remained calm.

"He then walked to the back of my car and took pictures of my car plate number. I walked up to him and started to take videos of him as he was not even wearing a mask."

A video that Simon shared with Stomp shows him confronting the man.

The man, whose mask is under his chin, does not respond verbally but can be seen recording Simon with his phone instead.

The man then starts walking off and putting his mask on properly.

The video also shows him walking around the carpark and approaching other motorists.

Simon added: "The man walked up to different cars to take their car plate numbers down with the driver still inside. Some of them had just arrived at the carpark.

"He was not even driving and had in fact been riding a small motorbike. So what was his intention in doing all this???

"In the video, you can hear me laughing due to the fact that I had caught him not wearing a mask. I'm not sure what his intention is but since he wants attention, I will make him famous."

Related Stories
Netizens mock woman who accused cabby of looking at her breasts in mirror
Man confronts auntie who took Kopitiam card that he was using to chope hawker centre table
Man drives off while woman confronts him for allegedly hitting her parked Mini at Geylang
More About:
dispute
parking
pollution
weird
Covid-19