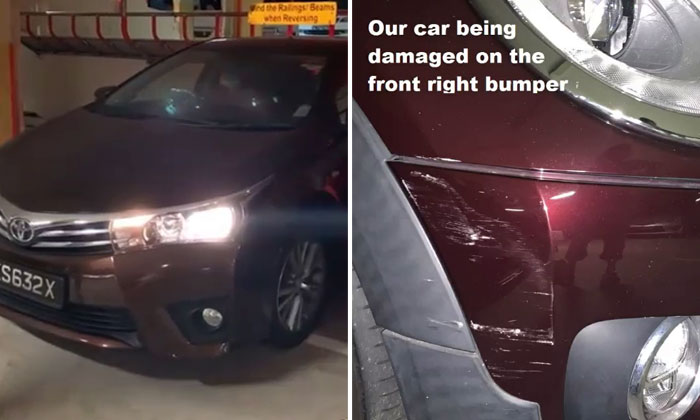 Two drivers were involved in a confrontation at a multi-storey carpark along Geylang Lorong 1 on Sunday (Dec 12).

A video of the incident was shared on ROADS.sg's Facebook page.

According to the caption, a woman was informed by an eye-witness that a Toyota car had hit her MINI twice while its driver was attempting to park it in the adjacent lot.

"[The witness] said that he stayed behind to wait for my wife as a note (his contact details) he had left behind on her car mysteriously went missing," the woman's husband said.

The woman proceeded to confront the Toyota driver when he returned to his car at about 9.20pm.

The situation escalated when the man acted "blur" and refused to acknowledge the damage or exchange contact details with her.

When she informed him there was a witness, he reportedly turned aggressive and shouted: "I pay lah, what's the big deal, I pay!"

The man and his wife then got into their car and started to drive off despite the MINI driver telling them to wait for the Traffic Police to arrive.

"In desperation, my wife tried to prevent the vehicle from leaving by standing in front of it but was failed as the perpetrator dangerously proceeded to move his vehicle forward towards her, threatening to run her over, endangering her," her husband said.

"In a panic, another witness managed to capture a video of the perpetrator driving off."

According to the woman's husband, a police report has been made.