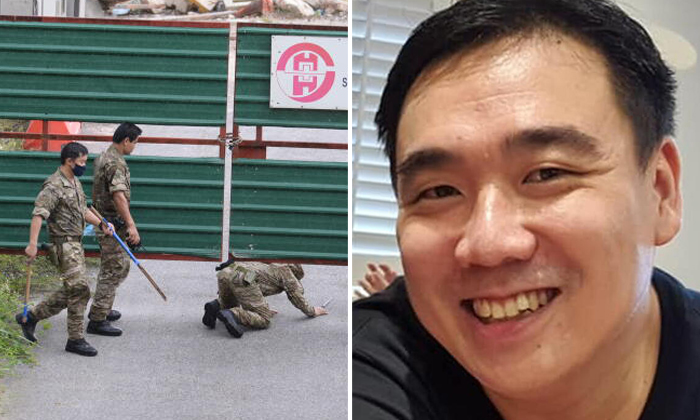 The family of the man who was fatally stabbed on Sunday night in Punggol Field arrived too late to catch his last words in hospital.

The man has been identified as Mr Tay Rui Hao, 38.

He is believed to be married and lived a few streets from where he was found stabbed.

According to Mr Tay's posts on social media, he worked in the local branch of a sportswear company.

His father told Chinese dailies Lianhe Wanbao and Shin Min Daily News on Tuesday (May 12) that the family is shocked by what happened.

The father was quoted as saying that his son had texted him earlier in the day to tell him he was heading out for a run as he was feeling cooped up at home due to the circuit breaker measures.

That was the last he heard from his son, Mr Tay's father reportedly said.

He said Mr Tay left home at about 10pm and was brutally attacked just two streets away from his flat.

Mr Tay is understood to live with his wife and their dog.

Mr Tay's father said that he, his wife and daughter rushed to Sengkang General Hospital at about 1am on Monday but they were too late. He described his son as easy-going and talkative, and said what happened was "very unjustified".

"I hope any eyewitnesses will quickly contact the police, so that my son can rest in peace," he was reported as saying.

A former colleague described Mr Tay as a funny and lovable person who readily gave advice and supported his subordinates.

Ms Nur Aziyati Johari, 28, said Mr Tay, who was an area manager at a retail store, got on well with his younger subordinates and advised them a lot on work.

He was supportive of her decision to resign and move overseas for a new position, she recalled.

“He was like our father and best friend,” said Ms Nur Aziyati, who now works in human resources.

The attack is unacceptable, she said, adding that she hoped justice will be served.

Mr Tay also switched jobs and was working for a local branch of a sportswear company , according to his social media account.

Mr Tay was found by a resident at about 11pm on Sunday.

The resident had heard cries of help and when he went down, found Mr Tay with stab wounds along Punggol Field, near the Matilda Sundeck HDB development that is under construction.

He was wearing jogging shoes and was in a football jersey.

The resident told The Straits Times that Mr Tay was seen struggling to get to the back of a bus stop, where he collapsed on a grass patch.

The police were called and he was sent to hospital where he died.

The case has been classified as murder.

Police officers, including those from the Gurkha contingent, were seen combing the vegetated area all through Monday, and the bus stop was cordoned off.

Members of the media, including The Straits Times, tried to observe the wake, but were not allowed to enter.

Security officers stationed at the entrance said visitors were allowed in only if they had a note given by the family to join the wake.

Under safe distancing measures, a maximum of 10 people at a time are allowed to attend cremation services.

Anyone with information can call the police hotline on 1800-255-0000 or submit information online.

Police said all information will be kept strictly confidential.