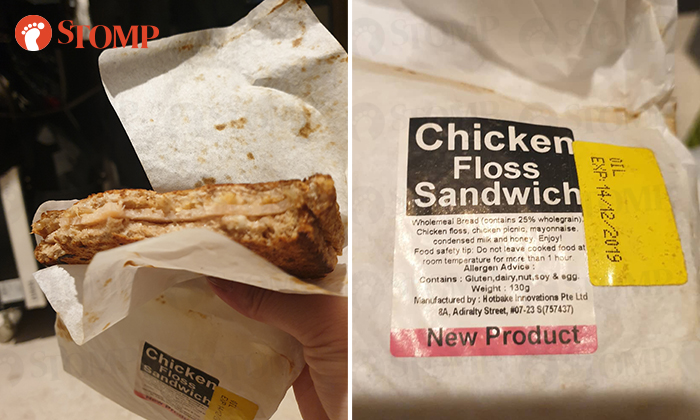 The company, owned by a small local family, was established in 2002 and is the first of its kind in Singapore.

Stomper M contributed photos of the sandwich she got from the vending machine at about 6am on Thursday (Dec 12).

She told Stomp: "I had a fainting spell and went to the hospital's emergency room for a check-up.

"The vending machine was working fine, so I chose the Hong Kong Chicken sandwich and waited 90 seconds.

"I was surprised to receive a package that was labelled 'Chicken Floss' instead.

"When I opened the package, I realised it wasn't what I ordered. There was only chicken ham and it was $3!

"This is my first time making a purchase from the Hotbake vending machine.

"I didn't contact anyone about this as I headed home after seeing the doctor.

"I didn't call support because I was too tired and drowsy after taking my medication, that's why I bought the sandwich as I needed food before consuming my medicine."

Responding to a Stomp query, Director of Hotbake Gareth Davis said: "After checking extensively with our Operations, Delivery, and Bakery teams we can confirm that the sandwich contained within the packaging was in fact, the correct one. Chicken Floss.

"As sandwich varieties start to change (we want to give customers as much diversity as possible) we will always insert a little note advising them of upcoming menu changes as your pictures have shown.

"Naturally we are disappointed that the customer felt that it did not meet his or her expectations and customer satisfaction is paramount to us so we would like to take the chance to offer them some free sandwiches."

Related Stories
KFC investigating after woman finds 'thick' piece of plastic with price tag in Zinger burger
Customer and Kovan stall employee argue after daughter allegedly overcharged for chicken rice
Diner buys duck rice from Yishun stall as photo looks 'impressive', but is not impressed at all
More About:
food