Man charged with murder of wife: Friend says victim told her she was pregnant 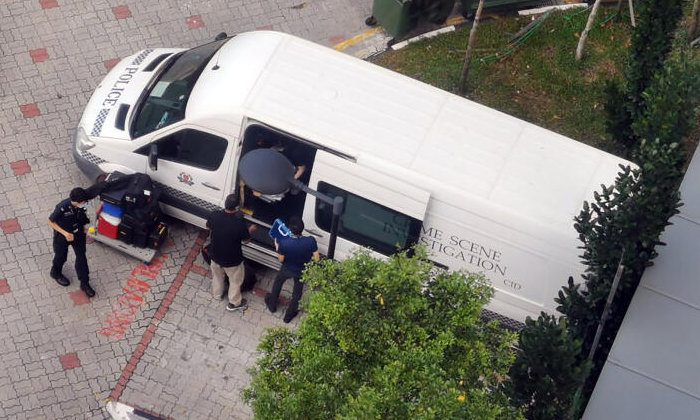 She was awoken by a scream at around 7am on Tuesday (Jan 11), but did not think much of it and went back to bed.

The housewife, who wanted to be known only as Ms Vivian, only realised something was wrong an hour later when she noticed police cars downstairs while sending her daughter to pre-school.

She later found out that a neighbour had been arrested after allegedly killing his wife.

On Wednesday, David Brian Chow Kwok-Hun, 33, was charged with murder by a field magistrate at Tan Tock Seng Hospital.

He is alleged to have killed his wife, Ms Isabel Elizabeth Francis, 30, at a residential unit in Ang Mo Kio Street 23.

Offenders convicted of murder can either face the death penalty or be jailed for life and caned.

In a statement on Tuesday night, the police said they were alerted to a stabbing case at the flat at about 7.35am that day.

When officers arrived at the scene, they found the woman lying motionless in the unit. She was pronounced dead at the scene.

Chow was taken to hospital with injuries.

Speaking to The Straits Times on Wednesday, Ms Vivian said: "I only knew something was wrong when I sent my daughter to pre-school at 8am and saw the police cars downstairs.

"A section of the second storey was also cordoned off."

A part-time student at Singapore University of Social Sciences, who declined to be named, said she had met Ms Francis in January last year when they started the juris doctor graduate law degree course together.

"It seemed like she was at a good place in life, she was married and last year she got her place renovated and moved in," she said.

"She told me she was pregnant about two weeks back and should be expecting around the middle of the year. I was super happy for her.

"I know her as a very eloquent person, she's always on the ball and well-prepared for classes - just a promising student."

She added that Ms Francis landed a job in marketing last year.

According to Ms Francis' LinkedIn profile, she started a full-time job at Deliveroo as an assistant manager in brand campaigns and partnerships last October.

A check of the Registry of Marriages records showed that the couple got married in 2019.

According to Accounting and Corporate Regulatory Authority records, Chow is the director and chief executive of security training centre KnowledgeTree Training Centre, as well as the director of EvolveTec, which provides physical- and cyber-security services.

When The Straits Times visited the flat on Wednesday, bloodstains and bloodied footprints were still evident on the floor outside.

At around 11am, two men came to take photographs but declined to comment.

Some residents said the Ang Mo Kio Court Build-To-Order project was ready in late 2020, and many moved in last year.

Ms Vivian, who lives in a flat above the second-storey unit, said she moved in last March and did not know the neighbours well.

"I'm still in shock, the scream is still ringing in my head."