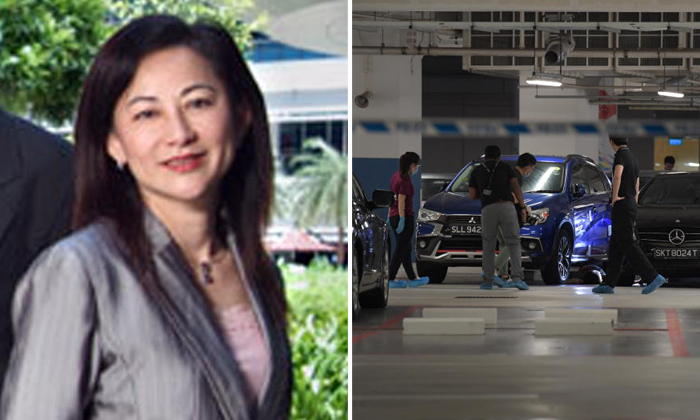 Weeks before he fatally stabbed his former wife in a carpark at the Institute of Technical Education (ITE) College Central campus, retiree Seet Cher Hng wrote in a note: "She has made me the best I can be, to be a killer."

On Wednesday (Sept 22), the 69-year-old was sentenced to life imprisonment.

He was convicted of a reduced murder charge by the High Court last week, after he indicated that he would not be contesting the charge.

Seet, who believed he did not get a fair share of the matrimonial assets, had been demanding money from Ms Low Hwee Geok, 56, and even threatened to sue her.

He also blamed her alleged infidelity for their marriage ending and went as far as engraving on a knife the dates when he purportedly caught her.

On Wednesday, it was revealed that Seet had penned several letters - addressed to his daughter, sister, a friend and the police - before the fatal confrontation.

In a note to his sister, Seet wrote: "I have decided on another action, to take her along with me.

"She has made me the best I can be, to be a killer. If her lover... is with her on that fateful day, then it's fated that 3 will leave together."

Seet also told his daughter: "You may not forgive me for what I am going to do but it is my decision after these 10 years of soul searching every day... I took your mummy away for hurting daddy."

The notes were read out by Deputy Public Prosecutor Hay Hung Chun, in response to a claim in Seet's mitigation plea that he only intended to negotiate the return of his monies that day.

The DPP said the letters conveyed a "palpable sense of resignation, finality and fatality".

"They show... a man who had finally screwed his courage to the sticking place after years of prevarication."

In mitigation, Seet's lawyer, Mr Wendell Wong, aired his clients' grievances over his financial disputes with his former wife following their divorce in 2011.

Mr Wong said Seet "spent many years trying to persuade and reason" with Ms Low so that he can recover his retirements funds and spend his final years "with some dignity".

He said Seet hoped to seek forgiveness from his daughter and hoped "to be able to see her face and hear her voice some day".

But Justice Aedit Abdullah said the matter raised in mitigation was irrelevant to sentencing.

"Furthermore, the victim was killed and cannot respond to the assertions made against her," said the judge.

"What is relevant in the mitigation are the factors going to the choice between capital punishment and life imprisonment."

Justice Aedit cited the Court of Appeal ruling that the death penalty will be imposed where the killing shows conduct that would outrage the feelings of the community through viciousness or blatant disregard for human life.

In the present case, he said: "The killing of the victim is to be deplored, and whatever grievances the accused may have had against her would not, by any means, justify, excuse or even lessen the seriousness of the killing or his criminal responsibility.

"Nonetheless, there was nothing here of the nature that to my mind would call for the imposition of the death penalty."

The judge noted that the prosecution was not objecting to life imprisonment.

"It would be rare indeed for the court to impose a sentence not sought by any party to the proceedings."

At the time of the murder, Seet was retired from his job at ITE Headquarters and had been relying on monthly Central Provident Fund payouts.

Ms Low was divisional director of the examinations division at ITE College Central.

Seet, who is twice divorced, believed he did not receive his fair share of the sales proceeds of a condominium unit in Corporation Road which the couple had jointly purchased while married.

Some time before Chinese New Year in 2018, Seet left a letter on the windscreen of Ms Low's car, demanding $500,000 and threatening to start legal proceedings.

Ms Low did not respond to his demands, and Seet became increasingly isolated and upset.

On July 19, 2018, Seet collected a car he reserved through a car-sharing site, and drove it to the ITE campus.

He brought along a haversack that contained, among other things, three knives, a spanner and a note addressed to the police.

He arrived at the carpark at about 4.40pm and waited for Ms Low.

At about 7.30pm, when he saw Ms Low approaching her car, Seet got out of his vehicle and walked quickly towards her.

As she got into her car, he entered through the front passenger side.

Ms Low screamed loudly when she saw Seet, who then grabbed her arm to stop her from getting out of her car.

She managed to break free after a brief struggle but fell as she stepped out of the car. Seet then ran towards her and stabbed her multiple times.

He then stabbed himself 13 times and collapsed on top of her.

It was revealed in court on Wednesday that he told passersby "let me die, don't save me".

A call was made to the police at about 7.45pm. Ms Low was pronounced dead at the scene by paramedics.

Seet was taken to hospital, where he underwent surgery for abdominal injuries and was placed in intensive care until July 25, 2018.

A forensic pathologist said each of the three wounds to Ms Low's left upper chest, left mid-back and left lower back was sufficient to cause death.

Seet was initially charged with murder under Section 300(a) of the Penal Code, which carries the mandatory death penalty.

This charge carries the death penalty or life imprisonment.

Seet Cher Hng had a note for the police in his haversack on July 19, 2018, when he stabbed his former wife.

Parts of the note and three others penned by Seet in April 2018 were revealed in court on Wednesday.

"Daddy hope to see you for one last time this coming weekend or next as I have numbered my days."

"You may not forgive me for what I am going to do but it is my decision after these 10 years of soul searching every day... I took your mummy away for hurting daddy, breaking up our family and not returning my CPF money... "

"I have decided on another action, to take her along with me. She has made me the best I can be, to be a killer."

"If her lover... is with her on that fateful day, then it's fated that 3 will leave together... I am going to be the devil to handle the devil in her."

"Please inform Piet that I had decided to take another course of action to settle my life though I have told him that I would take legal action for settlement."

"I am doing it my way... Michelle had decided for me my course of action when she refused to return my CPF savings."

"Inflicting these mental and physical torture that I had to bear for the past 10 years, blinded by greed for money and refusing to return my CPF money had led me to make this final decision. I do not want to waste more time bringing her to court to expose her doings. It's murder and suicide. I had enough of it all. Did warned her she will lose big time if she refuses to return my CPF for my decent old age survival."