Man calls woman sl*t, threatens to beat her up for intervening in dispute 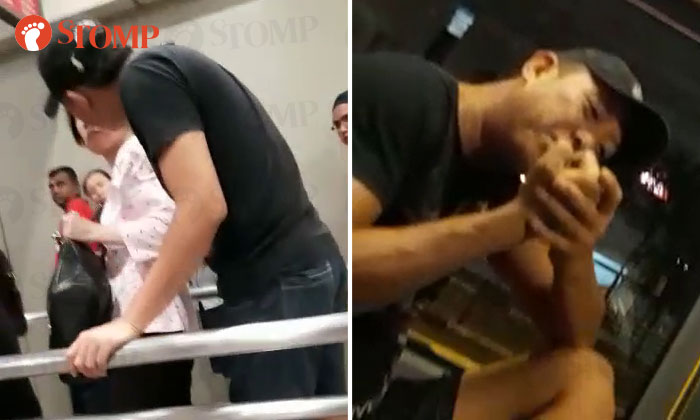 Stomper Kara was at Ang Mo Kio Bus Interchange on Apr 30 when she witnessed a dispute between two men and a woman queueing for a bus at about 10.57pm.

Stomp understands that the dispute was over queue-cutting.

In a video Kara shared with Stomp, one of the men is seen asking the woman in front if she is taking photos.

He then holds up his fist and says, "I'll call the police".

Another man then gets very close to the woman and talks to her with his face mere inches away.

Kara told Stomp that she tried to intervene and the woman left later, while she boarded the same bus as the two men.

In the bus, she captured footage of one of the men threatening to beat her up.

Throughout the video, he goes on a monologue on how he "will not let her go".

He says, referring to Kara, "I just want this motherf***er only".

He then raises his fist and says, "[I'll] make sure [to make] another print on her face".

He also mentions that he is "very drunk".

He tells his friend:

"[She] messed with the wrong person."

He then tells his companion to go off first but his friend tells him that he "has" to stay with him and adds that he has not eaten yet.

The other man continues on his rant and says:

"She's not going anywhere, I will grab her.

"Once she drops, I'll grab her and I'll punch her.

His friend shakes his head and tells him not to do that but the man says, "That's why I'm here".

Kara also told Stomp that one of the passengers who boarded the bus later heard the two men threatening her and started taking a video of them as well.

She later forwarded the video which she took to Kara.

In the video, the man who issued various threats in Kara's video repeatedly calls her a "fu**ing sl*t".

He goes on to say that he is going to "get her", and "slap her upside down".

Later, he asks his companion to go home, but the other man refuses.

The latter is then seen making a phone call before the end of the video, although it is unclear whom he is calling.

Stomp understands that the police has advised both parties to lodge a Magistrate's Complaint.