Man arrested for series of underwear theft in Tampines: 2,500 undergarments seized by police 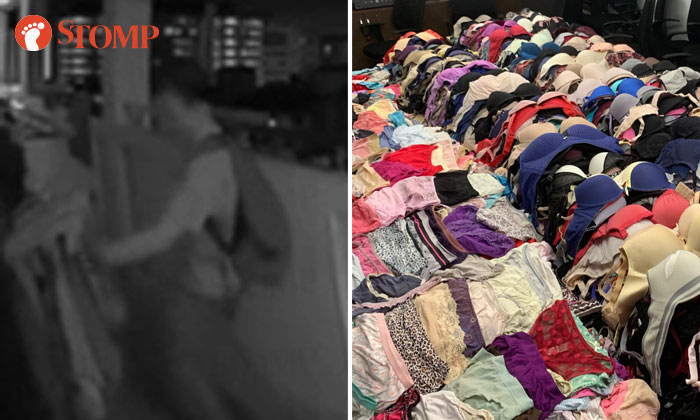 A 41-year-old man has been arrested for his suspected involvement in a series of theft of undergarments in Tampines.

Stomp earlier reported on an incident where a man, who is believed to be a suspect, was caught taking bras from a laundry rack along the corridor of a Tampines HDB block on Mar 15.

Stomper Lisa told Stomp the man had taken three of her bras which cost about $200 in total.

The police said in a statement on Thursday night (Apr 2) that they had received a report from a female victim on Mar 15 at about 3.30pm that her undergarments, which were left outside her unit at a block along Tampiens Avenue 9, had been stolen.

Officers from Bedok Police Division established the identity of the man and arrested him on Wednesday (Apr 1).

Preliminary investigations revealed that the man is believed to be involved in similar cases reported in Tampines.

More than 2,500 female undergarments found in his possession were seized.

The offence for theft carries a jail term of up to three years, or a fine, or both.

Previously, a 27-year-old man was arrested on Mar 17 for his suspected involvement in a series of theft of undergarments along the common corridors of Housing Board flats in Bedok and Tampines.