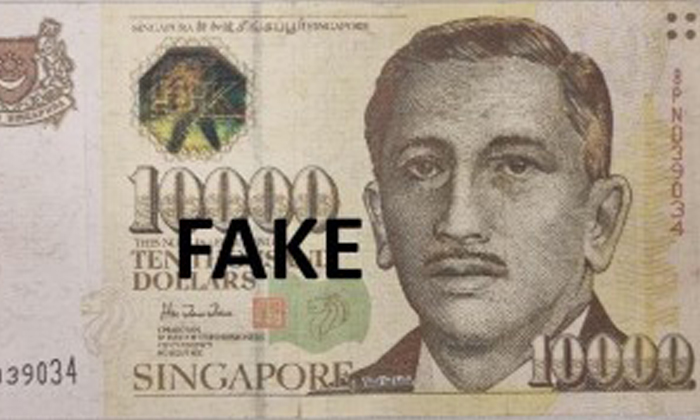 The police received a report at around 1.50pm on September 22, involving a man who had allegedly presented a counterfeit $10,000 portrait series currency note to a counter staff of a bank at Block 449 Clementi Avenue 3.

The man had allegedly requested to exchange the currency note into smaller denominations. However, the employee identified the note to be fake and alerted the police.

Officers from the Commercial Affairs Department arrested the man and quickly established the identities of two other women suspected to be involved in the case.

A counterfeit $10,000 currency note, a red packet and a fake document purportedly issued by the Monetary Authority of Singapore (MAS), were seized as case exhibits.

The police said they take a serious view of anyone found criminally involved in counterfeit currency.

Those found guilty of counterfeiting bank notes or using them can be jailed up to 20 years and fined.

The police also reminded members of the public to be wary of people wanting to exchange large denomination notes for smaller ones.

Those who suspect that they may have received counterfeit notes should:

Information on the security features of genuine Singapore currency can be found on the Monetary Authority of Singapore’s website.