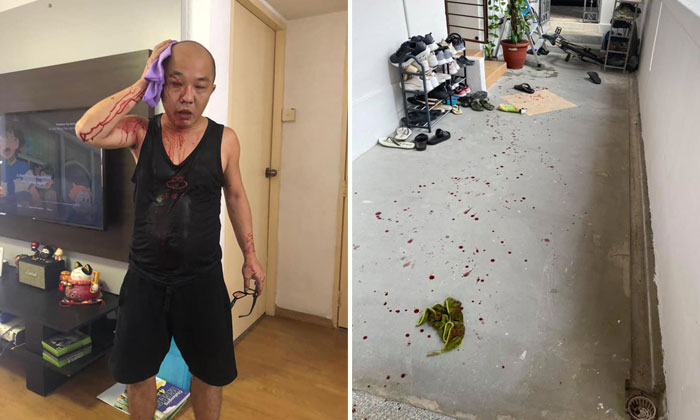 A 65-year-old man was arrested for allegedly hitting his neighbour with a bicycle chain, causing him to bleed profusely and to be taken to hospital.

Several Stompers alerted Stomp to a Facebook post by Alex Tohsw who shared his "horrifying" experience with his next-door neighbour.

According to him, he was cleaning the window panel outside his unit while standing on a metal ladder when his neighbour attacked him from behind with a bicycle chain that was attached to a lock pad.

"He claimed that I was blocking his path to go back home just because I placed his bicycle by the walkway," Alex wrote.

"He hit me twice on the head and shoulder with the bicycle chain.

"I shouted for help as my head was bleeding profusely and I was in severe pain.

"My two kids were in the living room and were startled to see me covered in blood."

He said another neighbour intervened and stopped the older man from attacking Alex.

"A 47-year-old man had sustained a laceration on his head, and was conscious when conveyed to the hospital," a police spokesman said.

"A 65-year-old man was arrested for voluntarily causing hurt with a dangerous weapon."