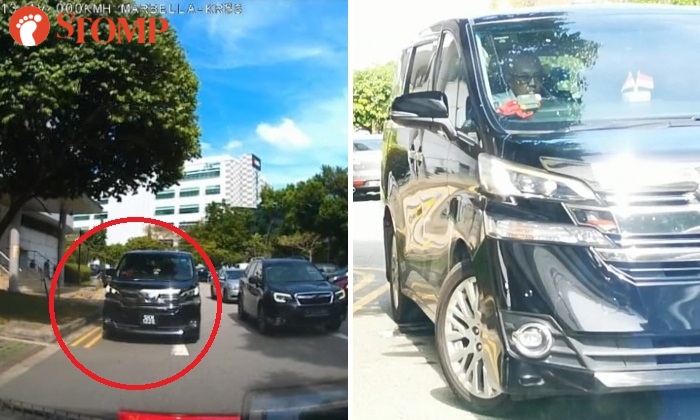 Another day, another driver blocking traffic.

Stomper W was driving into the IMM carpark in Jurong at around 3.30pm on May 6 when he was blocked by a Toyota minivan.

The minivan had stopped on the side of the road with double yellow lines as can be seen in a video shared by the Stomper.

W was unable to go around the vehicle because traffic was coming towards him in the other lane.

He said he did not honk at first because he thought the minivan driver would move upon seeing the obstruction he was causing, but realised the driver was simply "pretending" to use his phone.

After waiting more than 20 seconds, W started sounding his horn as cars were piling up behind him. Another 30 seconds passed before the minivan drove off when the other lane was clear.

Under the Environmental Protection and Management (Vehicular Emissions) Regulations, it is an offence for the driver of a motor vehicle to leave the engine of a vehicle idling while it is stationary, except:

The law also states that double yellow lines on the road means no parking allowed.

Under the Road Traffic Act, “park” means “to bring a motor vehicle or a trailer to a stationary position and cause it to wait for any purpose other than that of immediately taking up or setting down persons, goods or luggage”.

In other words, no parking means no waiting too.