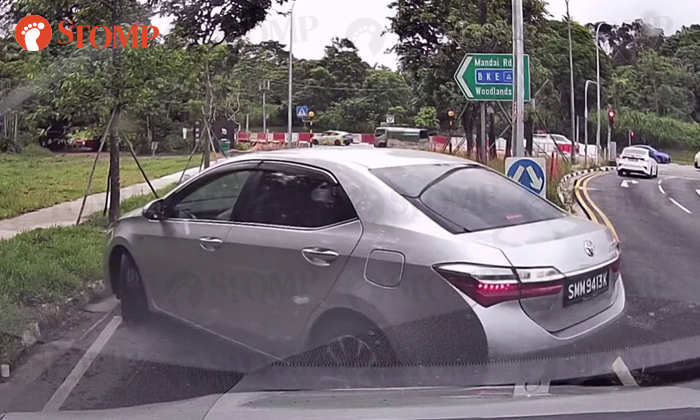 A man was dismayed by the actions of a fellow driver who "jammed up the entire filter lane" and forcefully reversed his way out.

Stomper Charles shared dashcam footage of the "selfish driver" that he encountered along Mandai Lake Road on March 17, at around 5.08pm.

Charles recounted: "As I was driving along Mandai Lake Road and turning left to filter to the main road (Mandai Road), the car in front of me suddenly stopped in the middle of the filter lane.

"The grey Toyota Altis refused to proceed even after the cars in front of him had moved away. He engaged his reverse gear and intended to reverse his car back into the middle of the filter lane.

"I could not move my car as there were other cars behind me and reversing was going against the flow of traffic. However, the driver refused to move and kept signalling for me to reverse so that he could change lanes and go another way instead.

"By this time, several cars had already formed up behind me and he was jamming up the entire filter lane because he took a wrong turn but refused to proceed.

"He even wound down his window and signalled for the cars behind him to move back so that he could reverse. He refused to move unless he was given enough space to reverse and change lanes.

"When the cars behind me reversed and gave me space to do so, I reversed a few metres. He also reversed, changed to the lane on the right and moved off.”