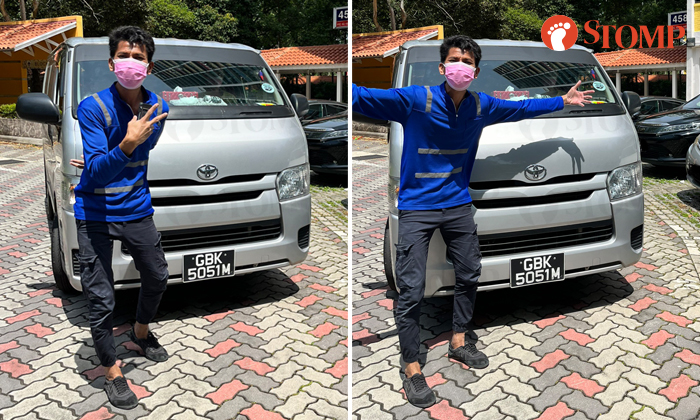 A van driver was unrepentant about obstructing traffic at a carpark in Ang Mo Kio and even challenged a man to take photos — which he gladly posed for.

Stomper Chen said the incident occurred at the carpark at Block 458 Ang Mo Kio Avenue 10 on February 21, at around 11.53am.

He recounted: "I was going to the hospital to pick up my wife after her chemotherapy, but found my car blocked by this Lalamove van driver who had parked horizontally across three vehicles while doing his delivery in the nearby blocks.

"I waited more than 10 minutes for him to return. I told him that in future he should park his van in the carpark lots instead of blocking others, since there were many lots available during that time.

"But this driver just shouted and acted arrogantly. He said, 'Why wait a while also cannot ah?'

"I told him that if this was his attitude, I would take a photo and complain to Lalamove. So he challenged me to do it and even posed for the photos.

Photos that Chen shared with Stomp show the driver posing in front of his van, which can be seen parked horizontally across three cars.

Chen said that the van driver left after posing for the pictures.

Related Stories
Man 'attacked' by youth while in queue for Astons at JCube: Police investigating
Merc driver unleashes string of profanities on deliveryman, but there's more to the story
Errant driver gets note telling him not to obstruct traffic 'by order of Telok Kurau residents'
More About:
dispute
parking
parking fail
rude
inconsiderate