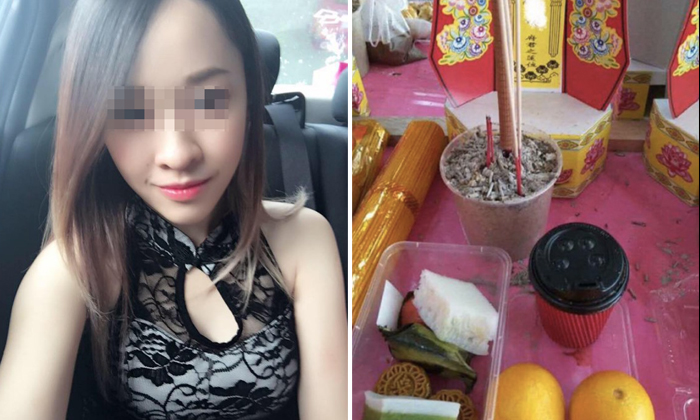 Breakups take courage and guts, especially when you are dreading the reaction of your soon-to-be-ex-boyfriend or girlfriend.

Which is probably why a guy chose to take the easy (not to mention cowardly) way out and dumped Facebook user Vicki, who is believed to be Malaysian, by blocking her on all social media platforms.

This prompted Vicki to conduct a morbid 'farewell ritual' for her ex-boyfriend, photos of which she shared online.

She wrote in a post that has since been removed: "Dear boyfriend. how are you?

"Ever since the start of the year when you went overseas to work, I have not seen you!!

"At first, there were still texts and video calls... Gradually, I realised that you blocked me on Facebook, Instagram and WeChat...

"I called your brother and friends, who said they couldn't locate you and even told me not to wait any longer.

"I suppose you must have encountered a disaster overseas, otherwise you wouldn't ignore my texts or not answer my calls. It's like you disappeared!!

"A few days ago, I saw someone performing rituals near my house!!

"As your girlfriend, this is the last thing that I can do for you, which is to send you off! I hope you reincarnate into a good family!"

According to World of Buzz, Vicki's post garnered mixed reactions.

While some sympathised with her and slammed her ex-boyfriend for being a coward, others felt that she went overboard.

One user commented: "If something really happened to him, what are you going to tell his parents?"

Vicki later clarified that she meant the post as a joke and did not really mean it.

Related Stories
Savage GF takes sweet revenge against dude who missed date because he got drunk and overslept
Girl gets the best revenge after her BF dumps her just before prom and asks for his money back
Expensive car, company shares and more: What Tony Hung had offered ex-GF Natalie Tong in order to salvage 2-year relationship
More About:
couple
break up
breakup
facebook
savage
Malaysia
Malaysian
revenge