Malaysian police looking for woman who ripped off car plate, tried to stop vehicle from moving 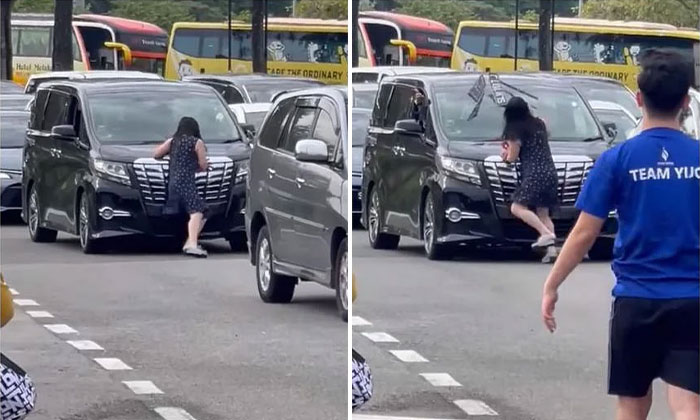 Enraged after a car scraped hers at the Tuas Second Link, a woman ripped the number plate off the car, threw it onto the windscreen and tried to stop the vehicle from moving.

She is now wanted by the Malaysian police for committing mischief on Saturday (July 9) near the Sultan Abu Bakar Customs, Immigration and Quarantine Complex in Johor Bahru.

Iskandar Puteri Johor District police chief Rahmat Ariffin said on Saturday that the Malaysian police are still identifying the suspect, who was in a red Kia with a Singapore licence plate.

He said in a statement: "During the incident, the victim who was riding a Toyota Alphard car changed lanes to the right and scraped a Kia car.

"The suspect then stopped the car and a Chinese man and woman alighted. The man shouted profanities and made offensive gestures (at) the victim, while the woman dismantled the licence plate of the victim's car and threw it onto the victim's windscreen."

Assistant Commissioner of Police Rahmat said the victim was not injured and only had slight damage to his car. Footage from the victim's dashcam was recorded, he added.

It is not clear whether the car has a Malaysia or Singapore licence plate.

A video posted by Facebook group SG Road Vigilante, which has been shared more than 500 times, shows the woman in a blue dress filming the victim before walking in front of the black Toyota Alphard.

She then jerks her head as if to taunt the people in the car and appears to shout while gesturing with her hands.

As the car tries to move forward, she pushes against it to stop it from moving. When several vehicles honk at her for holding up traffic, she gestures at them to overtake the car.

A man wearing a blue Yishun Innova Junior College shirt then gets out of the red Kia and makes an offensive gesture at the driver of the Toyota Alphard.

Related Stories
Motorcyclist throws bottle at car in anger along Clementi Road
Bentley driver who tried to force his way into school charged with causing hurt by rash act
Van driver and passenger shout and hurl vulgarities at lorry driver for not signalling along CTE
More About:
Tuas
mischief
road rage
dispute
argument