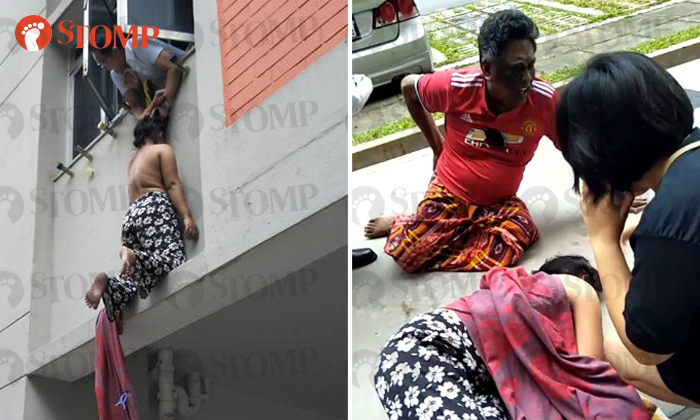 A 27-year-old Indonesian woman suffered serious injuries after slipping and falling from the third storey of Block 233, Simei Street 4 yesterday morning (April 26) at around 11.25am.

Several videos of the incident were submitted to Stomp. One clip showed a man on the second storey grabbing onto the woman, while another showed the woman lying on the ground floor after she fell.

Stomp understands that the woman is a domestic worker from Indonesia.

The bamboo pole then gave way, causing the woman to slip.

A male resident on the second storey managed to catch her, as seen in the video. However, he was unable to hold onto her for long.

During this time, the woman's shirt "gave way" and slipped off her body.

Stomp understands that the woman's fall was broken by a 63-year-old man on the first floor.

Both the woman and the elderly man were taken to Changi General Hospital (CGH) in a conscious state.

A witness who watched the scene unfold told Stomp: "I was so scared. I couldn't sleep well yesterday night."

In response to Stomp queries, the Singapore Civil Defence Force (SCDF) said it responded to the incident at 11.26am.

CGH had been alerted to be on standby to receive the woman. This is typically seen in more serious cases.

The Ministry of Manpower (MOM) told Stomp in a statement today (April 27) that it is investigating the incident.

A spokesman said: "The MOM was informed by the police about a fall from height incident involving a foreign domestic worker (FDW) on 26 April 2018.

"Employers of FDWs are required to provide safe working conditions and ensure their FDWs perform their duties according to the safe work practices stipulated by MOM.