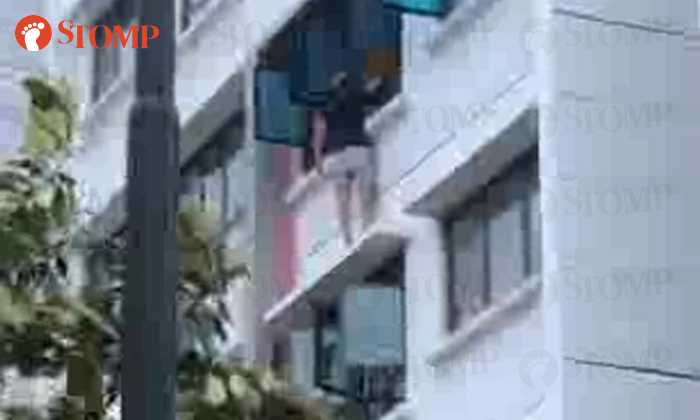 A woman was spotted standing on the fifth-storey parapet of Block 371, Jurong East Street 32, at around 6.30pm yesterday (March 13).

Stomper Ashwini witnessed the incident and said it drew a large crowd of onlookers.

She also contributed a video showing the woman in her precarious position and a Red Rhino at the scene.

The police told Stomp that they were alerted to the case at 6.58pm.

In response to a Stomp query, the Singapore Civil Defence Force (SCDF) said it was alerted to the incident at 6.30pm.

"The subject, a female Chinese in her 30s, was brought to safety by members of public," added the SCDF.

She was subsequently taken to Ng Teng Fong General Hospital in a conscious state.

Related Stories
Drama at Simei: Man rescued after five hour standoff on fourth-floor ledge
Maid dangling on parapet: She climbed out of window after being locked in room while cleaning
49-year-old woman arrested for attempted suicide and drug-related offences at AMK Block 645
More About:
scdf
dangerous
man on ledge
rescue