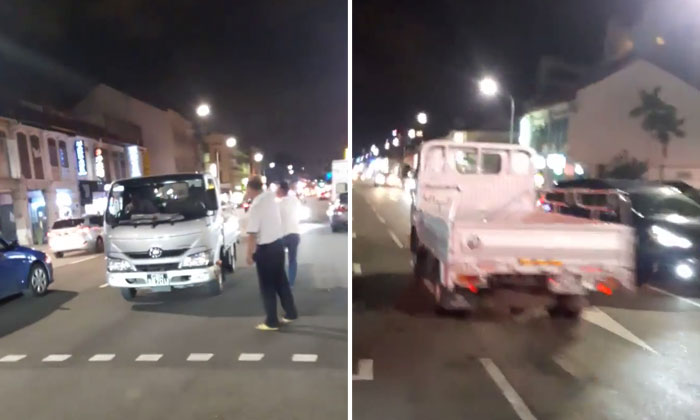 A 31-year-old lorry driver has been arrested for going against traffic along Geylang Road on Oct 20.

Stomper Allen alerted Stomp to a video of the incident that was posted on SG Road Vigilante's Facebook page on Thursday (Oct 24).

In the video, the driver of the Toyota lorry with licence plate number GBH3670U is seen facing the opposite direction amidst oncoming traffic.

Several passers-by are heard shouting at the driver, gesturing at him that he is going the wrong way and to turn around.

However, he seemingly ignores them and continues to drive against traffic with his headlights turned off.

In response to a Stomp query, the police said a 31-year-old man has been arrested for dangerous driving.

This is not the first time drivers have been caught on camera going against traffic.

In September, a 32-year-old woman was arrested for dangerous driving and had her licence suspended after she was caught driving her Mercedes-Benz against traffic in Chinatown.