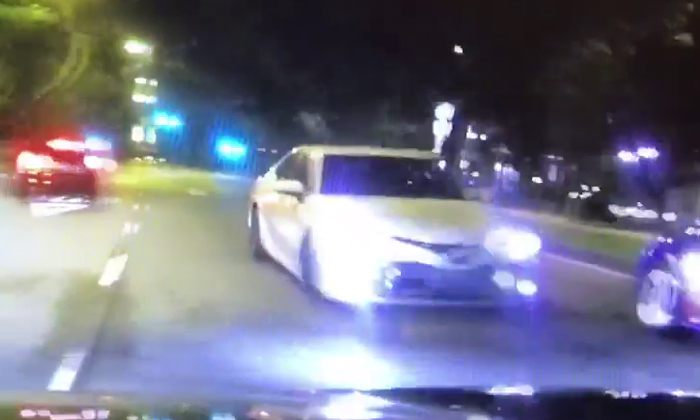 A driver was caught on camera going against traffic and nearly colliding with several other vehicles on Monday night (July 8).

Mr Chris Pong captured a video of the incident that occurred along Upper Thomson Road, towards Sembawang, at around 11.20pm and posted it on the Singapore Police Force's Facebook page.

He wrote in his caption: "Officers, please track him down!!!"

In the video, a white car can be seen travelling down the road in the wrong direction.

Mr Pong and a black car in front of him had to swerve to avoid the white car, while another car on the rightmost lane tried to brake.

When contacted by Stomp, Mr Pong recounted the incident and said: "I had no visual of the driver until the last moment because there was a car in front of me.

"I swerved instinctively to avoid him. Luckily, there were no vehicles or worse, motorbikes, on my left."

According to Mr Pong, the errant driver continued on his way after the near-accident.

Mr Pong told Stomp: "He went on down the road and from my rear-view mirror, I could see oncoming traffic flashing their lights at him.

"He made no effort to turn around and I feel that his actions were deliberate. It wasn't as if he had wandered into the wrong lane and then tried to turn around."

Mr Pong said that he has yet to lodge an official police report, but hopes that sharing the video will enable enforcement action to be taken.

"I'm just thankful I got home safe to my family. Things could have ended badly in a head-on collision," he added.

"Drivers like this are totally irresponsible. His actions could have caused serious injury to other road users.

"It's very disturbing to know that we share the roads with such people. I hope the law catches up with him."