Lorry driver arrested for dangerous driving after accident with bus and car, 2 taken to hospital 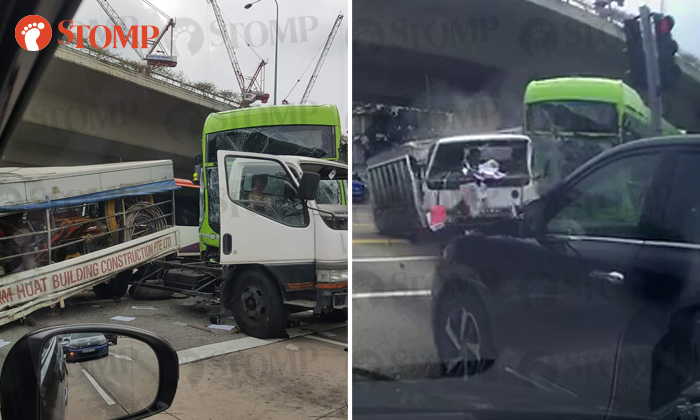 Two passengers were taken to hospital after a road accident involving an SBS Transit bus, lorry and car at the junction of Braddell Road and Bishan Road on Thursday (Jan 16).

The police have arrested the lorry driver, a 23-year-old Indian national, for dangerous driving.

The Singapore Civil Defence Force (SCDF) and police were alerted to the accident at around 3.30pm. A 22-year-old male lorry passenger and a 46-year-old female bus passenger were conscious when taken to Tan Tock Seng Hospital, the police said.

The other bus passengers were evacuated and the bus was taken off service.

Eyewitnesses said that the collision between the lorry and the bus at the junction pushed the lorry to the opposite side of the road, causing it to hit the stationary car that was waiting for the traffic light to turn green.

Madam Jenny Toh, the driver of the stationary car, told The Straits Times: "It happened too quickly that I had no time to react. My car was bought only two years ago. I could not even reverse in time to avoid them. I am just lucky that I am okay." The 53-year-old, although visibly upset, did not sustain any visible injuries.

The lorry driver, an Indian national who has been in Singapore for 1½ years, told ST that he just obtained his Singapore driving licence three months ago and has been driving for about 20 days. He works for Lim Kim Huat Building Construction and was driving to a nearby construction site when the accident occurred.

The driver sustained light injuries - a small cut on his left hand - and was seen walking with a slight limp.

By 5.30pm, both the bus and the car were no longer at the scene. The car was towed away and the driver drove the bus away.