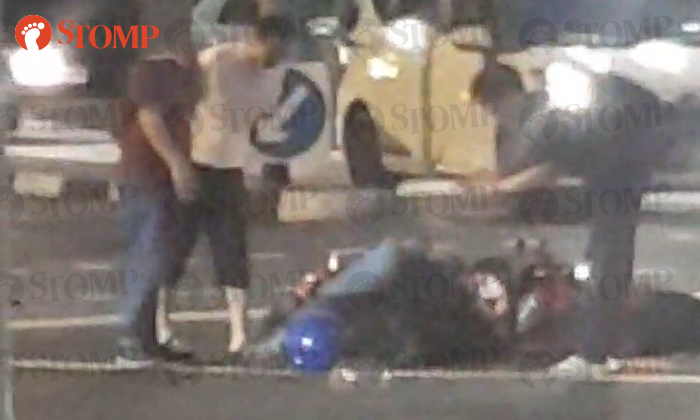 An SBS Transit bus driver was arrested for careless driving causing grievous hurt after an accident with a motorcyclist in Jurong West on Thursday morning (Jan 9).

In response to a Stomp query, the police said they were alerted to the accident at the junction of Pioneer Road North and Jurong West Avenue 5 at 6.51am.

Stomper Mazlan took a video that shows the motorcyclist lying on the road and shared it with Stomp.

He said: "I was sitting at the coffee shop at Block 964 Jurong West when I heard a loud bang.

"I saw a motorcycle behind an SBS Transit bus. It seemed like they had both been trying to make a turn and thought they could pass.

"The motorcyclist was lying beside his bike and not moving at all.

"There were also a few men there trying to help.

"My wife later spoke to the men, who said that the motorcyclist was still breathing."

The motorcyclist, a 31-year-old man, was conscious when taken to National University Hospital.

Ms Tammy Tan, senior vice president of corporate communications at SBS Transit, told Stomp: "The motorcyclist is currently undergoing treatment in hospital and his wife is by his side. We are in touch with her and will be rendering our assistance during this difficult time.

"We are very sorry that this has happened.

"Meanwhile, we are assisting the police in their investigations."