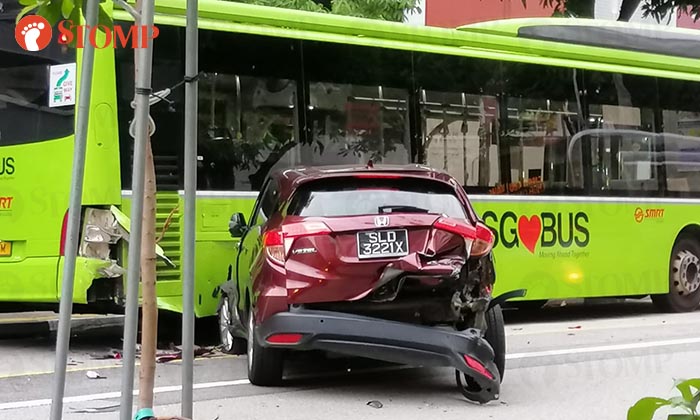 Two cars were wrecked after an accident involving a SMRT at Block 204 Choa Chu Kang Central on Sunday evening (Oct 27).

A Stomper was at Block 206 Choa Chu Kang Central when he heard a loud crash.

He contributed photos of the scene of the accident and told Stomp: "I didn't see how the accident happen but I saw that the red car was wrecked.

"This happened along the road between Blocks 206 and 234 of Choa Chu Kang Central, near a bus stop.

"I immediately called 995 and the personnel on the phone asked me to check if anyone's hurt.

"When I went closer to the scene of the accident, I saw that two cars and a bus were involved.

"The emergency response team arrived at the scene in about five minutes.

"Thankfully all the passengers of the vehicles involved are all right.

"Paramedics at the scene still checked and made sure that they were all okay.

"Traffic police was at the scene too and was able to manage the congestion right away.

"Four male bystanders also helped to push aside the wrecked car so that the road could be cleared.

"I've never witnessed any accidents before but when I heard the crash and saw the wrecked car, my instinct was to call for help.

"I'm just glad that nobody was really hurt and I admire the quick deployment of the emergency response teams."

Photos show that debris was scattered on the ground.

In response to a Stomp query, the Singapore Civil Defence Force (SCDF) said: "At 6.06pm on Oct 27, the SCDF responded to a road traffic accident along Choa Chu Kang Central in front of Block 204.

"A person was treated on location by SCDF paramedics."

Stomp understands that the involved parties settled the matter privately.