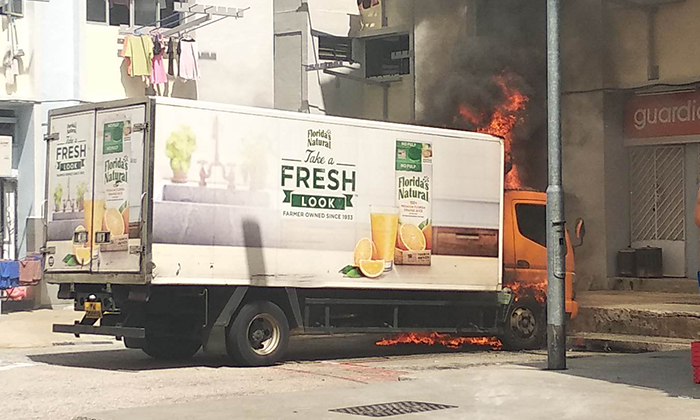 A lorry caught fire at a carpark next to Block 745 Bedok Reservoir Road on Wednesday afternoon (Jan 22).

Stomper Bbcake had just returned home with his two daughters when he heard a loud explosion.

He contributed photos of what he saw and said: "I live on the sixth floor of Block 703.

"My daughters and I had just returned home for about half an hour when suddenly, there was a loud explosion followed by the smell of smoke.

"We looked out of a window and saw thick smoke coming from Block 745.

"One of my daughters headed downstairs with me. We walked towards where the smoke was at and saw that it was a lorry that had caught fire.

"It was very scary. There were some smaller explosions as we were there, so we didn't dare to go too close.

"We heard something like glass cracking and falling onto the ground.

"The firefighters came and put out the fire really quickly.

"My daughter and I stuck around to see the firefighters extinguish the fire before returning home.

"Don't know what caused it, but it's just the front part of the lorry."

Responding to a Stomp query, the Singapore Civil Defence Force (SCDF) said: "SCDF responded to a fire at a carpark next to Block 744 Bedok Reservoir Road at about 2.40pm.

"The fire, which involved the engine compartment of a vehicle, was extinguished by SCDF using one compressed air foam backpack and one hose reel.