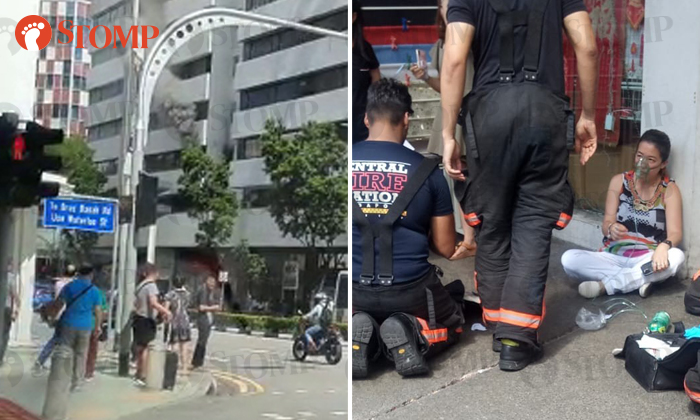 A woman suffered smoke inhalation after a fire broke out in a public entertainment outlet along Middle Road on Monday (Jan 6).

The Singapore Civil Defence Force (SCDF) said in a statement that it was alerted to the blaze at 114 Middle Road at around 11.15am.

Nine emergency vehicles and about 30 firefighters were deployed to the scene.

According to the SCDF, the fire was seen raging with flames and black smoke visible from the exterior of the premises upon its arrival.

"Firefighters wearing breathing apparatus sets proceeded cautiously into the heavily smoke-logged premises to conduct firefighting operations," added the SCDF, who shared a video of the scene.

The fire, which involved the contents of a public entertainment outlet located on the fourth floor of the premises, was extinguished by the SCDF using two water jets.

A woman was taken to Raffles Hospital for smoke inhalation.

Around 60 people were evacuated by the police prior to the SCDF's arrival.

Stomper Abdul was driving past the scene when he noticed smoke billowing from the building.

Upon stopping for the red light at a traffic junction, Abdul took a video and submitted it to Stomp.

In one picture, a woman can be seen wearing an oxygen mask while seated on the ground.

Anonymous told Stomp: "I was passing by when I saw three fire engines and four police cars.

"I could smell smoke and staff from the eighth floor of the building were affected as well."