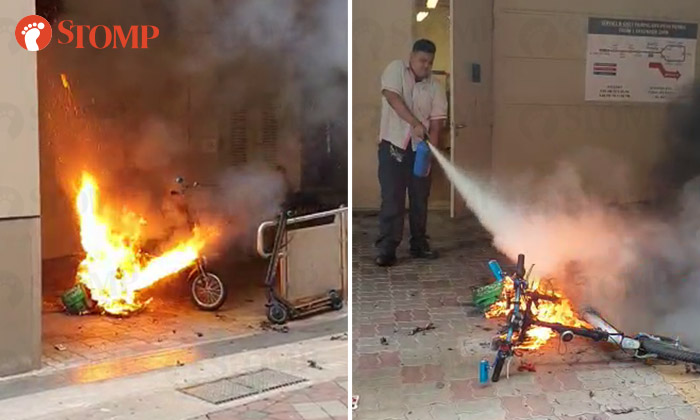 Stomper Abdullah contributed a video of the incident.

In the video, the e-bike can be seen in an upright position as flames engulf it.

Explosions can be heard as the fire rages and the e-bike then falls onto the ground.

An SMRT staff can then be seen putting out the fire with a fire extinguisher.

Stomper Jeff shared with Stomp a post of the incident that was published on Facebook page SG Road Vigilante.

According to SG Road Vigilante's post, the PAB is a Mobot that has an illegally-modified external battery installed.

Responding to a Stomp query, the Singapore Civil Defence Force (SCDF) said: "On Jan 3 at about 10.45am, SCDF responded to a fire at 15 Choa Chu Kang Avenue 4.

"The fire, involving a power-assisted bicycle, was extinguished by SMRT staff using a fire extinguisher prior to SCDF's arrival.