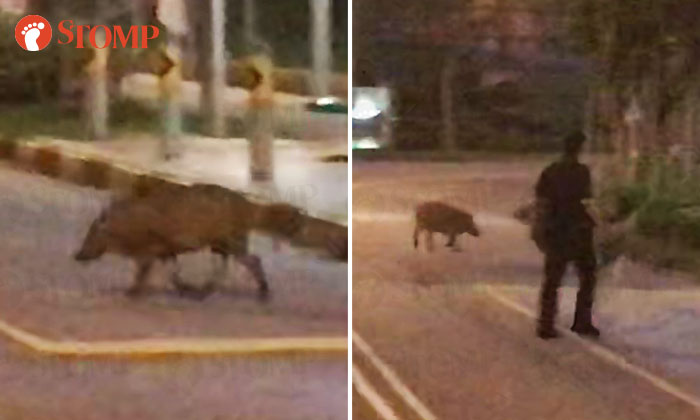 Stomper Abi and her husband Vincent were surprised when they saw a wild boar casually trotting across Choa Chu Kang Street 52 a few times on Tuesday (July 31) at about 6am.

Abi shared a video she took of the incident with Stomp which showed the boar being followed by police officers armed with shields.

"There were several people at the bus stop and out and about but the wild boar did not seem to be fazed at all," said Abi.

The wild boar may be the same one that was seen on July 19 near Block 563 at Choa Chu Kang Street 52.

"I have been living in this estate since 1994 but I have never seen a wild boar in the area before this," said Abi.

She told Stomp that she believes it might have come from the forested area beside the nearby army camps.

"If you did not know the hidden dangers, you would think the wild boar was actually very cute," she added.

In Stomp's previous report on the lone wild boar sighted in the Yew Tee HDB estate, the Agri-Food & Veterinary Authority of Singapore (AVA), Marsiling-Yew Tee Town Council and Animal Concerns Research and Education Society (Acres) told Stomp that they are aware of the animal and are monitoring the situation.

"Based on our observations, the boar seems very comfortable being near humans - which could possibly mean that the animal has been previously fed by humans causing it to not be shy."

While Acres is looking into how the matter can be peacefully resolved in a way that benefits both the animal and Yew Tee residents, Mr Kalai advised motorists in and around the area to slow down and be more vigilant in the morning period between 5am and 10am.

"We also advise residents not to approach, provoke, chase or feed the boar," he said.