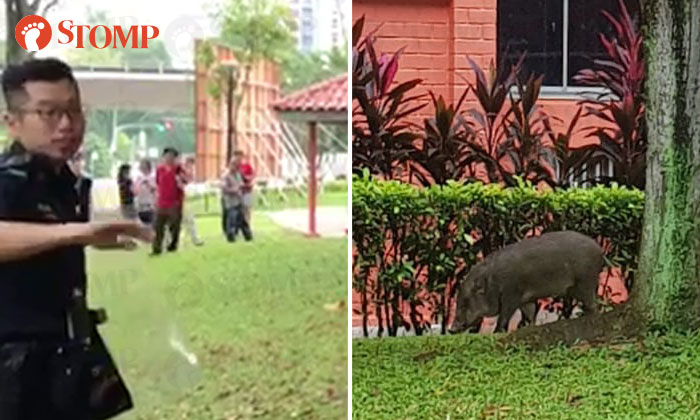 A wild boar grazing next to Block 562 Choa Chu Kang Street 52 attracted a crowd of curious onlookers on Thursday (July 19) at about 9am.

Stomper Jerica's mother shared a photo of the boar with her daughter who sent it to Stomp.

"My mum said that police were surrounding the boar and holding shields," said Jerica.

"I don't know how it appeared in the neighbourhood."

Stomper Peg was also at the scene and contributed a video of the boar.

Stomp understands that nobody was injured while the wild boar was in the area and that it returned to a forested area nearby after making its appearance.

In a joint statement with the Agri-Food & Veterinary Authority of Singapore (AVA), a spokesman from Marsiling-Yew Tee Town Council said that they have received feedback on sightings of a wild boar in the vicinity of Choa Chu Kang Way and Choa Chu Kang North 6.

"It was observed to have gone back into nearby forested areas," the statement said.

"We are monitoring the situation and are conducting surveillance at the location.

"The Town Council will be putting up AVA’s wild boar advisory around the estate."

In response to a Stomp media query, Deputy Chief Executive of Animal Concerns Research and Education Society (Acres) Mr Kalai Vanan Balakrishnan said that they are also aware of the lone wild boar that has been sighted in the Yew Tee HDB estate at Choa Chu Kang Street 51 over the past few weeks.

"Based on our observations, the boar seems very comfortable being near humans - which could possibly mean that the animal has been previously fed by humans causing it to not be shy," he told Stomp.

Mr Kalai said that Acres is looking into the matter to see how it can be peacefully resolved in a way that benefits both the animal and residents in the area.

"In the time being, we advise motorists in and around the area to slow down and be more vigilant in the morning period between 5am and 10am," he said.

"We also advise residents not to approach, provoke, chase or feed the boar.