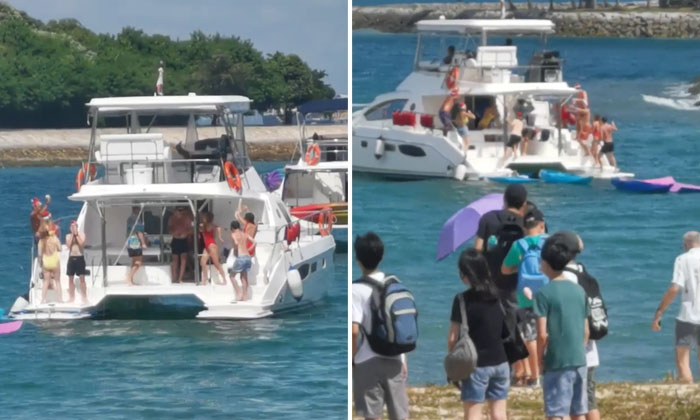 A pleasure craft's licence has been suspended by the Maritime and Port Authority of Singapore (MPA) over an incident on Boxing Day last year that allegedly broke safe distancing rules.

This included having more than five people in a group.

In a statement on Saturday (Jan 23), MPA said the Advant's licence will be suspended for 30 days over the Dec 26 incident near Lazarus Island.

MPA said preliminary investigations revealed the number of passengers on the craft was more than the maximum group size of five that was allowed at the time.

Singapore entered its third phase of reopening on Dec 28, which allowed up to eight people for social gatherings.

The craft had been chartered for a social gathering and there was co-mingling among the individuals on board, based on the investigations which is still ongoing.

Photos and videos of the incident were posted on social media on Dec 26, showing at least 10 men and women dancing without masks.

MPA added that further action may be taken against anyone found to have breached the law.

"MPA reminds all pleasure craft owners and operators to adhere strictly to the safe management plan they have submitted for their business operations, and play their part to keep the Covid-19 situation under control in Singapore.

"MPA takes a very serious view of any breach of safe management measures and will not hesitate to take the parties involved to task," it added.

The latest incident was among other recent group gatherings that allegedly contravened Covid-19 measures, prompting enforcement action from the authorities.

CherryLoft Resorts & Hotels in Pasir Ris was fined $1,000 and ordered to suspend bookings for 30 days earlier this month after it breached multiple safe management measures and allowed 19 people to gather on its premises. All 19 were fined $300 each.

Last October, 12 people were charged with allegedly flouting safe distancing measures and taking part in an unlawful gathering on Lazarus Island amid the Covid-19 outbreak on Aug 8. So far, eight members of the group have been fined $3,000 each.

First-time offenders who breach laws under the Covid-19 (Temporary Measures) Act may face a fine of up to $10,000, up to six months' jail, or both.

Repeat offenders can be fined up to $20,000, sentenced to a maximum of a year in jail, or both.

The craft or vessel can also have its licence suspended by MPA for up to 30 days, and the owner or operator be required to put in place an approved safe management plan.