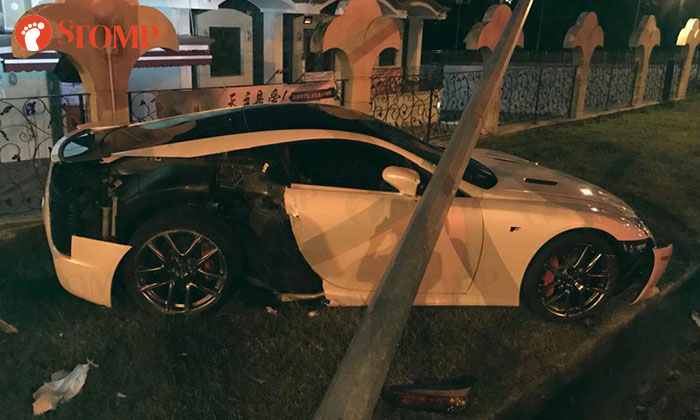 A video of a Lexus sports car crashing into a lamp post near Siglap Church after its driver lost control has been circulating on Facebook.

In the video, a passenger is seen boarding the Lexus.

The clip then cuts to the white Lexus zipping along the rightmost lane on a road.

The Lexus is suddenly seen swinging from side to side, before abruptly veering sharply to the left, cutting in front of a bus on the left lane.

Mr Wong, who took the video, told The Straits Times that he was in his friend’s car when he noticed the Lexus.

Said the 28-year-old student: "When he went past us, he floored the gas pedal and lost control and crashed into the lamp post.

"He didn't hit the bus, the bus was just a little too slow."

Mr Wong added that there were two men in the car.

In response to media queries, a police spokesman said that it was alerted to an accident involving a car at Changi Road, towards Geylang Road on Sunday (April 8), at 9.51pm.

No injuries were reported, and police investigations are ongoing.

Related Stories
Driver of SY770D cuts into motorist's lane on PIE, then flashes middle finger at him
Driver's reckless turn could have gone very badly for 3 different parties
Biker left with flesh exposed after getting rear-ended by driver who did not signal along PIE
More About:
accident
Siglap
reckless driver
errant driver