Driver of SY770D cuts into motorist's lane on PIE, then flashes middle finger at him 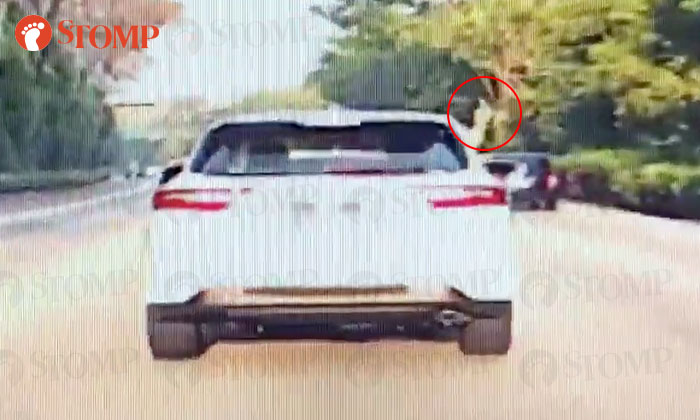 Driving can be dangerous, especially when you’re sharing the roads with reckless drivers.

Stomper Adam encountered one such driver along the Pan-Island Expressway (PIE) on Friday morning (April 6), who not only cut into the lane he was on, but even flashed the middle finger at him.

The incident was captured on the dashboard camera on Adam’s car.

In the video, Adam vehicle is seen travelling in the middle lane when the driver of a white car SY770D suddenly cuts into his lane from the leftmost lane.

After that, the driver winds down his window and flashes the finger at Adam.

He then moves into the rightmost lane.

While doing so, he once again flashes the finger at Adam.

According to Adam, he had not noticed the car approaching from the left as it was in his blind spot.

Realising how close the car was coming, Adam then sounded his horn.

However, the driver persisted in cutting into his lane, and Adam had to slow down his vehicle to let the car through.

“This is a hooligan who doesn’t follow the driving etiquette.

“There were no vehicles behind, and he could have just moved behind me and then switched to the rightmost lane if that was where he wanted to go, but he didn’t.

“Instead he chose to wedge his car between me and the vehicle ahead.

“This is definitely reckless driving.

"If I didn't slow down and let him through, there would have been an accident."

Related Stories
Man drives away from accident site with victim on bonnet, gets jail and driving ban
Driver's reckless turn could have gone very badly for 3 different parties
Biker left with flesh exposed after getting rear-ended by driver who did not signal along PIE
More About:
errant driver
PIE
reckless driver