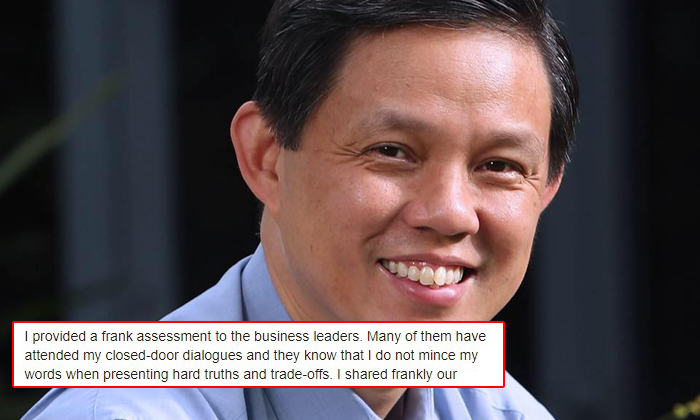 The leak of a recording from a closed-door meeting between Singapore Chinese Chamber of Commerce and Industry (SCCCI) members and minister Chan Chun Sing is "deeply disappointing" and a betrayal of trust, the chamber's president said on Tuesday (Feb 18).

In a letter to members seen by The Straits Times, Mr Roland Ng said the chamber is investigating the matter, which has "serious implications" on its standing, on Singapore and on Mr Chan, who is the Trade and Industry Minister.

This came after a 25-minute recording of Mr Chan's remarks during the meeting on Feb 10, which covered the coronavirus outbreak and the current economic situation, among other issues, was circulated widely on social media and messaging apps like WhatsApp.

In his letter, Mr Ng said members had been informed multiple times that the meeting was off-the-record. The recording was thus "a clear breach of trust".

"Such actions dilute the trust and confidence that others have in us and will discourage active and open participation from our speakers, guests and even our own members in future private settings. Trust has to be mutual, earned and built over time," he said.

During the meeting, which lasted over two hours, Mr Chan spoke candidly about the supply of surgical masks, and said masks were not the solution to the coronavirus outbreak.

"No matter how many millions of masks we have, we will never have enough," he is heard saying in the recording.

Noting that Hong Kong was facing a shortage of masks for medical personnel there, he said that if Singapore had issued masks indiscriminately, the hospital system would have "broken down", as there would have been no masks for hospital staff who have to take care of the infected.

Neither could members of the multi-ministry task force here have worn masks like Hong Kong Chief Executive Carrie Lam did at a recent press conference. This would have caused panic, said Mr Chan.

While his remarks were reported in Hong Kong, there has been no official comment from Mrs Lam or the government there. Mr Chan and the SCCCI did not address reports and comments about his remarks out of Hong Kong.

During the SCCCI meeting, Mr Chan said that to calm nerves here, the Government distributed four masks to each household - but that also meant there were five million fewer masks in its limited stockpile.

This was a "gamble", as supply chains were disrupted with no clear indication of how long the outbreak will last, and consequently how long masks should be conserved for essential medical personnel.

Mr Chan also said he was ashamed by the panic buying at supermarkets, stores and other outlets. He used the Hokkien colloquialism "sia suay", used to describe embarrassing or disgraceful situations.

If just a small group behaved like "idiots", this would "kill" Singapore's ability to negotiate prices of key supplies internationally, he said.

On Monday (Feb 17), Mr Chan alluded to the leaked recording and the meeting in a Facebook post, where he said he had a "frank, closed-door discussion" with SCCCI business leaders.

"Trust and confidentiality will be critical in sharing such sensitive matters in closed-door sessions. Hearsay taken out of context will be unhelpful to trust-building and collective actions in these difficult times," he added.

Mr Chan said he spoke frankly on the nation's challenges and trade-offs as he saw the business leaders as part of Team Singapore, and having a shared understanding was critical to take difficult decisions together.

"Many of them have attended my closed-door dialogues and they know that I do not mince my words when presenting hard truths and trade-offs," he added.

In his letter to SCCCI members, Mr Ng recalled that Mr Chan, a regular at the chamber's dialogue sessions, had always frankly shared his views and candidly exchanged ideas with members.

"Many of us appreciate and have benefited from his candour and willingness to share, especially in intimate, closed-door settings."