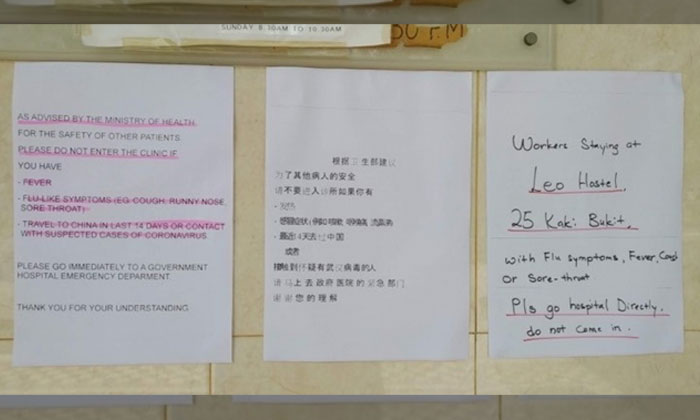 Amidst the spread of the coronavirus from Wuhan, China, a clinic in Ubi has been criticised by the public for turning away suspect cases.

In the notices, the clinic advises people with fevers, flu-like symptoms and those who have visited China in the last 14 days, or who have had contact with suspected cases of the coronavirus not to enter the clinic.

It also advises workers staying at The Leo at 25 Kaki Bukit with flu-like symptoms to go to the hospital and to "not come in".

On Feb 9, The Straits Times reported a Bangladeshi worker staying at The Leo was confirmed as one of the patients infected with the coronavirus, which has been named Covid-19 by the World Health Organisation (WHO).

Anonymous said: "In such times there are clinics telling patients to go away.

"If everyone exhibiting flu-like symptoms was told to go to the hospital, our hospitals would be flooded and unable to provide for those in real need of critical care.

"Such selfishness and lack of professionalism needs to be called out.

"As a member of the public, I am outraged."

Reporters from Shin Min Daily News visited the clinic on Tuesday (Feb 11) to talk to one of the doctors.

Dr Weng Shida, 38, said that there has been a "misunderstanding" regarding the notices.

He said the clinic was not refusing to see patients but preventing patients with other conditions from being infected, especially those who are more vulnerable like the elderly and children.

He added that at times, there are too many patients and waiting times can be up to two hours.

If everyone stayed in a confined space together, the risk of infection would increase, he said.

He gave an example where he saw a suspect case on Monday (Feb 10) and had asked the patient to go to the back of the clinic and into another room so that he would be isolated from other patients.

The patient was subsequently advised to go to the hospital for further testing as he had a fever.

Hence, Dr Weng put up the notices to ask patients with symptoms to wait outside the clinic.

Following the controversy, he said he would change the notices to make it clear that patients are being asked to wait outside the clinic.

Shin Min reported that a similar notice was posted at another nearby clinic, asking patients with suspicious symptoms to wait outside.

As of Wednesday (Feb 12) at 1.30pm, there are 47 confirmed coronavirus cases in Singapore.

Nine patients have been discharged from hospital and seven of the 38 patients still in hospital remain in critical condition and in the intensive care unit.