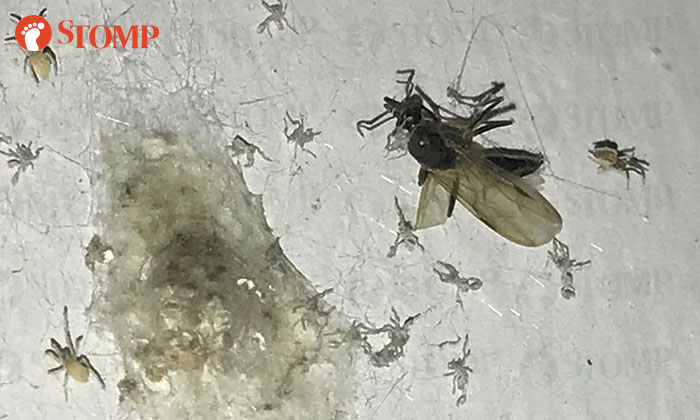 Stomper Lau Lup came across a fascinating colony of spiderlings outside his parents’ house at Hougang Avenue 10 on Thursday (April 5) at around 6pm.

He quickly told several videos of the arachnids and sent them to Stomp.

In the videos, the tiny spiderlings, there are could be seen emerging from a nest, while a fly lay beside it.

“It’s rare to see spiders living and share food. We know that most spiders are solitary creatures.

“I have never seen spiders living together like a family.

“Many species of female spiders may eat their mates during mating. Spiders are also known to be cannibalistic, hence it’s really surprising to see these spiders living and working together.

“Perhaps by being united, these spiders were able to subdue a fly many times their size.

“Maybe we can learn something from these spiders. United we stand, divided, we fall!”

Related Stories
Lau Lup strikes gold after finding this 'treasure' in hawker centre cockles
Endangered starfish spotted at Changi Beach: Look at the 'wriggling' tips on its arms
Lau Lup receives a sign that he's getting a promotion in his career and family
More About:
animals
insect
spiders