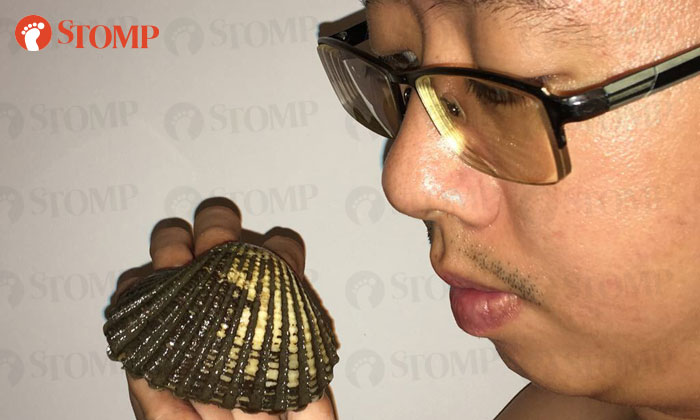 Stomper Lau Lup was having his lunch at Hougang Avenue 10 on Monday (13 Nov) around 12pm when he noticed something unusual.

He found pearls in the leftover shells of a cockles dish.

"I found pearls on both valves of a see hum after diners had their fill today! I guess the diners did not expect pearls in their seafood. They simply left the shells on the table after finishing their meal.

"Perhaps diners can be more observant when having a mollusc meal. Who knows, they may also find pearls embedded in their leftover shells.

"I had actually found two pairs of cockles with pearls in them before the hawker centre cleaner threw them away. I brought both home but realised one of them was missing.

"Later after work, my wife came home and gave me the missing one. She explained that she had brought the more attractive one to show to her work colleagues.

"I am happy to be reunited with the missing one, I took pictures of them for Stomp readers.

"The last cockle has only one pearl but it’s most unusual as the pearl is purplish black! It sure stands out among other cockles. It’s surprising that the diner did not realise what he or she left behind! I was lucky to be in the right place at the right time. I could not have seen the pearl if I did not occupy that particular seat."

Related Stories
Lift maintenance leads Lau Lup to 'giant' discovery
Endangered starfish spotted at Changi Beach: Look at the 'wriggling' tips on its arms
Look closely and you might find the creature hidden among these rocks
More About:
Lau Lup
bizzare
interesting